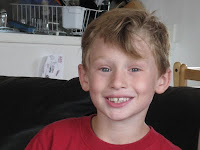 This is Ian, my nephew, in all his almost-seven-year-old glory. Next Friday, August 7th, he and a bunch of his friends will celebrate his seventh birthday (what my father always refers to as “the anniversary of his natal day”) at Bowlmor near Union Square, which is where he lives. 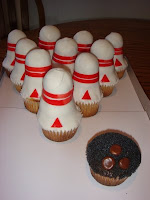 These are the cupcakes (what my father always refers to as “sweetmeats”) that my sister is planning to make to mark the occasion.

How cool is that?!

Stay tuned for photos of the treats straight from Amy’s kitchen!
Posted by JanetheWriter at 6:14 PM No comments:

The State of the Fleet

Tonight marks the beginning of my grandmother’s yahrzeit. Eighteen years….hard to believe it’s been that long. I thought of her last night– as I so often do – while waiting in a damp drizzle for the 57th Street crosstown bus.

“Never run after a man or a streetcar,” she told me repeatedly. “There’s always another one coming.”

Run, schmun, I thought, as the cold drops chilled me and the endless traffic streamed past with no bus in sight. If my recent (and not so recent) experiences in the Schmuck Parade reflect the state of the fleet, I’m riding around in gypsy cabs and jalopies. No, I’m not looking for a Hummer or a stretch limo with a driver -- just a clean, well maintained bus that runs on time, makes all scheduled stops, gets decent gas mileage and drops me safely near my destination.

MTA, can you help me out here?!
Posted by JanetheWriter at 12:34 AM No comments:

Email ThisBlogThis!Share to TwitterShare to FacebookShare to Pinterest
Labels: dating

When I was growing up in Somerset, New Jersey, we never called Somerset Park Pharmacy by name. “The Pharmacy” or just “Phil’s” was enough for everyone in town to know exactly what you were talking about. The tiny, cramped store in the row of four set back from Easton Avenue near Foxwood Drive was an institution. In the 1970s, before K-Mart, Target and Staples (and even after they showed up on the retail scene), it’s where we went for school supplies, cosmetics, birthday cards, gift wrap, band-aids, bubble gum, baseball cards, small gifts and, of course, prescriptions – antibiotics, cough syrup, inhalers, acne creams and the like – all filled by Phil himself. A handwritten sign in the front window gave a phone number – probably Phil’s home number – in case a medical emergency made it necessary for a prescription to be filled after hours. Thankfully, my family never had to use that number.

Bruce Schwartz (who I assume also grew up in Franklin, but I don’t know personally or on Facebook), seemed as incredulous as I was upon seeing the news, and commented thusly: “Phil Seidman passed away?”

When there was no reply, I repeated the question: “Did he?”

“Yes,” said Daniel Morris, another Franklinite who was a few years ahead of me in school and worked for Phil as a delivery guy.

“Very sad…” I said, trying to internalize that yet another piece of my childhood was no more.

“Wow, sad indeed,” commented Bruce Schwartz. “I have such great memories of him in the store.”

Bonny McClain from around the corner on Summerall Road chimed in with this: “I remember Phil as he was the only place to buy batteries on Christmas morning when Santa forgot them.......he was also very nice to my parents in their elder years. Thanks for posting, Bruce.”

By then, I’d emailed the news to my sister who, although she has neither the time nor the inclination to play around with Facebook, replied with this: “I'll always remember the image of that very cramped store with the claustrophobic aisles and John Harsell (her friend and the eternal pharmacy assistant) and Phil at the back watching everyone who came in...”

Amy’s reply reminded me of the very same thing…and so I continued the conversation: “The store always seemed especially cramped to me at back-to-school time when the spiral notebooks and pens were piled in boxes in the aisles between the cosmetics and the gift wrap. A bygone era...”

Then came Stuart Rosenthal from Tripplet Road who recalled, “Baseball card buying memories at Phil’s (THE Drug Store) for me.”

Next was Joanne Silverstein-Bacon (I can’t remember exactly where she lived, but I think it was over near Appleman Road. Am I right, Franklinties?) who said, “The best thing about the first day of school was going there for supplies.”

Last was Pam Boullé Gunter (I recognize the name, but can’t put a face with it…it’s been a lot of years), who said: “Phil from the Pharmacy? How sad. Marcy and what was the son?”

In the same way that we all have remembered Phil and his store, may Mitch and Marcy’s memories of their father and his pharmacy sustain them and their families during these difficult days and be a blessing to them always. And, as Bruce Weinstein, who started this entire conversation said, “Rest in peace, Phil Seidman.”
Posted by JanetheWriter at 9:16 PM 4 comments:

Yesterday morning on my way to work, I stopped at the D'Agostino's on 38th and Third for a pint of ice cream to accompany the fresh strawberries and sauce I was bringing to a friend's home for dessert last night. D'Agostino's was a departure from my usual Dunkin' Donuts coffee stop (medium decaf, light with lots of milk) and so I was glad to see the coffee and fixin's table close to the store's entrance, and even more pleased to see that the insulated jugs touted the Green Mountain Coffee label.

With that first sip came a flood of memories of other morning stops for Green Mountain Coffee, oh so many mornings ago. Back then, I was right next door to the Green Mountain State, literally, and routinely visited the Foodstop on Route 12A in West Lebanon, New Hampshire for my coffee, a copy of the New York Times (there wasn't much internet back then and the Valley News was the only paper that could be home delivered up there) and, about once a week, a gas fill-up for the car, before I crossed the Connecticut River into White River Junction, Vermont and continued my commute down rural Interstate 91. (Foodstop's the kind of place where, were I so inclined, I could easily have added a lottery ticket, a pack of cigarettes, a six-pack of beer or an extra large bag of Doritos to my order and nobody would have batted an eye.)

This morning, I again stepped out of the Third Avenue urban throng into D'Agostino's for a cup of that Green Mountain brew. Not only is it great coffee (this from a Dunkin' diehard) that evokes memories of me in a former life, but it's a bargain, too. In pure dollars and cents, it just makes sense: a 16-ounce cup at D'Ag is $1.51...at Dunkin' it's $2.05. Gotta love that Yankee ingenuity...and that Green Mountain coffee!
Posted by JanetheWriter at 10:05 PM No comments:

Thirty years ago last month as part of my Confirmation ceremony, I vowed to “guarantee a Judaic tomorrow.” Yes, sure, I support synagogue life – both personally and professionally – and yes, two summers ago, I did help shepherd hundreds of Jewish teens through the remnants of the eastern Europe of our grandparents and great-grandparents, but beyond that, have I actually done anything in the last three decades to really, truly “guarantee a Judaic tomorrow?!” As a 40-something with no children, I have to admit that the answer is, “No, not so much.”

Today, however, I served as a witness to a conversion and although my participation involved little more than sitting through a short service in which the new Jew by choice publicly affirmed her decision to join the people Israel, I do feel that in those few minutes I played a teeny, tiny role in helping to guarantee a Judaic tomorrow. You can read more about the experience here.
Posted by JanetheWriter at 10:29 PM No comments:

Freedom and Liberty...and Just How Lucky We Are

Thirty years ago, it poured in New Jersey on the Fourth of July. My family and I were spending the day with Natasha and Felix Brevender, brand new Soviet immigrants who were celebrating their newfound freedom and their newfound Judaism. (You can read a bit more about our experiences together here.) We’d planned on a cookout and fireworks, but ended up eating pizza and watching a movie instead. That day, I was reminded of freedom and liberty and just how lucky we are to have them in our lives.

Two years ago, it was sunny in Tel Aviv on the Fourth of July. Actually, when I arrived at the new Ben Gurion Airport on an overnight flight from Prague in the wee hours of the morning, it was still dusk, but having spent the previous 10 days in Poland’s empty synagogues, overflowing cemeteries and emotionally exhausting concentration camps, it was a homecoming like none other. I bid farewell to the NFTY kids and their leaders, stopped at an ATM for some shekels, and stepped out of the airport into the balmy dusk of early morning. Overwhelmed, I sat on the ground right next to the airport's sliding glass doors, legs outstretched, eyes closed and palms pressed to the ground, trying to put as much of my body as possible in true physical contact with the land. Only after sitting this way for a few minutes, breathing deeply, was I ready to get up and get in a cab to meet a friend in Jaffa. That day, I was reminded of freedom and liberty and just how lucky we are to have them in our lives.

I have no recollection of what the weather was like last year in New York City on the Fourth of July. I do know that I wrote this blog post about another long ago Fourth and was reminded, yet again, about freedom and liberty and just how lucky we are to have them in our lives.

Last night was a beautiful night in New York City. Comfortable temperatures and humidity combined with a cool breeze and clear skies--complete with a nearly full moon--made it a great one to be out and about. At Shabbat services, when “America the Beautiful,” was sandwiched between the kaddish and the kiddush, I was reminded about freedom and liberty and just how lucky we are to have them in our lives.

Today—and everyday—let us be thankful and grateful for our freedom and our liberty and recognize just how lucky we are to have them in our lives.