Here's Where I Was "Strabunsing Harum" 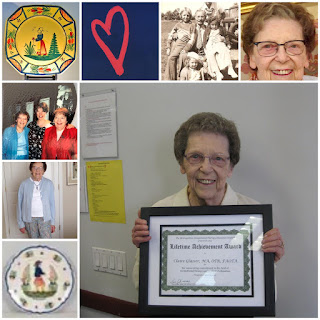 If you tried to call me yesterday and wondered where I was “strabunsing harum” (gallivanting about) as you always wanted to know, I was with all the other people who gathered to celebrate you and your life—and, at your request, not grieve your death. Although we’re terribly sad, I hope your ears were ringing. So many people had lovely things to say about you and your long, well-lived life. You would have loved to chat with them all!

Marc and Ted each spoke lovingly of you and how you always managed to balance your career as an occupational therapist—first working with stroke patients and later starting the OT program at Kean College of New Jersey—with being their mother, long before work-life balance was even a thing.

I recall visiting you in your office at Kean on several occasions, and I remember this story that happened during your tenure there: You woke up in the middle of the night and couldn’t remember if you’d turned off the coffee pot in the office. Ever practical, you called the campus safety and security office to see if someone could go check on the coffee pot. After you made this request, the person on the other end of the phone said, “Lady, we can’t do that right now, there’s a fire on campus.” Luckily, the blaze wasn’t in your building and, as you discovered the next morning, you had, in fact, turned off the coffee machine!

Marc and Ted also talked about your optimism, your knack for connecting with strangers, and how your service as a trustee on the board of Beth Sholom Reform Temple in Clifton (now a part of Temple Ner Tamid in Bloomfield) exemplified your commitment to Judaism.

I have a few distinct memories from your time in that congregation: I remember how you nurtured the temple’s “Laura Fischer Memorial Library” into existence after Tante Laura died and honored her memory by serving as the librarian for many years. I wonder what became of all those Laura Fischer Library books with the blue and white bookplates. Maybe some of them made it to Ner Tamid…

At Ted’s bar mitzvah luncheon in the social hall, when the DJ told him it was time to dance with his favorite girl, instead of picking you, he picked Jodi Cook… and in the four-plus decades since, I’ve reminded him of that faux pas every so often.

Lastly, although it happened long before I entered the Jewish professional world, I knew that having a woman cantor, as that congregation did, was a big deal. I’m not sure I realized back then that Barbara Ostfeld was the first ordained female cantor, but I always knew you were quite fond of her—and it was mutual. I connected with her during my time at the URJ, and she wrote this to me earlier this week, “I'm sorry and think that this particular loss is shared to one degree or another by so many. I count myself among them. She was unforgettable.”

Unforgettable is an apt description. So many of my friends (and Ma’s and Amy’s, too) remember you—and told me so on Facebook: “I remember your aunt as a sweet, quiet, gentle soul,” said Rabbi Debbie Bravo; Ma’s friend, Kathy Kahn, said, “I remember Claire so well. What a sweetheart she was...” Amy’s lifelong friend, Maria, wrote: “Aunt Claire was a lovely person…” (I love how she called you “Aunt Claire,” just like everyone called Uncle Irv “Uncle Irv.”) Judy Tushman said, “Claire’s collection of Quimper was the first thing she showed me in her apartment. It was amazing, and so was Claire. A truly lovely person, and a pleasure to know.”

Speaking of Quimper, I used to love to scour the tables at flea markets and antique shows for the familiar yellow and blue pottery and was so excited when, on rare occasions, I spotted it. One year that happened a few months before one of your milestone birthdays, and I was thrilled to purchase the two small saucers for you, adding a small card that said that as aunts go, no one could Quimper!

Even though it was a funeral, it was nice to see Marilyn and Phyllis (they hadn’t seen each other since before the pandemic), Norma, Eddie, and Ellen (and her husband), all of whom where there for you, as was Colleen’s sister and her family, along with a few of their cousins. Phyllis told me that she was so sad about you because, “Not only were she and your mom my cousins, but they were my friends. As a matter of fact, Claire and Jash were chaperones at my Sweet 16 party which was held at the China Doll in Manhattan.”

Orit Simhoni came up from Maryland to be with us yesterday, and although I spoke with her only briefly, she told me what a mentor you always were to her in her own career as an OT. In some ways, you were an OT rock star. Our family friend and also an OT, Jeanne Weisblatt, told me she “remembered meeting your aunt a long time ago and being so excited that she was a professor of occupational therapy at Kean College.”

I remember other things about your career—like how if you have to walk steps with a bad foot or ankle, you’re supposed to start “up with good and down with the bad.” I also recall how you often had a tape measure in your purse specifically to measure the width of various public restroom stalls to see if a wheelchair could fit within them—long before the ADA was enacted into law. Mostly, I remember the story you told about sending pairs of students from Kean to the mall to take turns being pushed by the other in a wheelchair, gaining a new perspective about the real-life, daily challenges people using wheelchairs face. When one pair of students switched places in public, they reported back to you and the class that they’d inadvertently caught the attention of other shoppers, who no doubt thought they were witnessing a miraculous cure unfold.

Debbie Stone was there, too, and told me how you and Uncle Jash were in the congregation the night she was installed as president of Temple Beth Tikvah, the community you joined after BSRT got folded into Ner Tamid, and how nice it was to look out and see your smiling face. Seeing a few pictures of you on Facebook, one of my friends wrote to me: “I can see your face in her smile.”

Mrs. Marks and Cheryl Ronan from Brookshire Drive were there, too. Mrs. Marks looks exactly as I remember her, and she told me that Phyllis’ daughter is pregnant, and she and Mr. Marks are very excited about becoming great-grandparents in a few months. I wouldn’t have known Cheryl, but I did remember that we’re nearly the exact same age (two days apart, it turns out), and it was nice to chat with her. All the “kids” talked about your backyard, the scene of so many cookouts and family celebrations of all kinds. I can see it all in my mind’s eye as though it was yesterday—the patio, Uncle Irv’s garden, home plate, the pitcher’s mound near the oak tree, and all your turquoise and white napkins, serving pieces, and paper goods that were specifically for outdoor entertaining. Someone mentioned there were no fences between most of the backyards on the street, so we probably could have walked straight through them all the way to Route 23.

I also spent time chatting with Beth, who drove to New Jersey from near State College, Pennsylvania. She told me about your trip together to Fallingwater (I remember when you went with her) and also about the place (whose name I cannot remember) you visited with her when she went to see you in Detroit a few years ago. She’s coming to NYC in October, and Amy and I plan to do some museum-hopping with her while she’s here. We’ve never spent time with her, and I’m looking forward to it. In an email I wrote to her last night, I said, “No doubt, we'll bring Aunt Claire along with us in spirit” and that is definitely true. I can’t quite believe you’re gone, but I will carry you in my heart always.

P.S. Of course, I'll always be so grateful for your help after my surgery in 2011 and remember how you wanted to be the first one to stay with me because, as you said, you knew how to manage the drains. I could not have asked for better or more loving care during that week.

Posted by JanetheWriter at 6:10 PM No comments: