The Screen is Alive...

Last night shortly after 8 p.m., Diane from Livingston updated her Facebook status with this: "The Sound of Music. Best movie ever!" I agree and grabbing my laptop, I went out to the living room to flip it on.
Settled on the couch with my computer, I updated my own Facebook status: Jane "is waiting for her favorite part of the Sound of Music -- when the nuns take the starter out of the Nazis' car. What's your favorite part?"
While I waited, the Von Trapp children, wearing play clothes that were curtains in a previous life, do-re-mi-ed around Salzburg while their father softened up enough to serenade everyone with Edelweiss, and after a few starts and stops, finally dispensed with the Baroness and ignited the sparks that had been smoldering between him and the erstwhile nun since the opening credits.

All the while, my friends were describing their favorite scenes in Facebook comments:

Like me, Peggy's son favors the nuns masquerading as mechanics.

Laurie and Leslie are partial to the Captain singing Edelweiss.

Jacquie can't decide on just one scene from her very favorite movie of all time.

Jane from Atlanta loves the whole thing...and has since she was seven and, sitting on pillows in the front row, saw Mary Martin play Maria on Broadway.
Sara's favorite part is Sixteen Going on Seventeen.

Rachel favors the kids singing So Long, Farewell at the party -- and when her mother sings along, too!

Kristin also likes the nuns and singing along.

Those last two reminded me of my "Sound of Music Sing-a-Long" adventure at the Hollywood Bowl during 2002. The outdoor amphitheater in the Hollywood Hills seats nearly 18,000 and on the summer night I was there, every seat was taken. Some filling those seats were sporting lederhosen while others had donned white dresses with blue satin sashes. Still others were schlepping brown paper packages tied up with string and, despite the pleasant Los Angeles weather, a few were wearing warm woolen mittens.

A juried costume parade preceded the subtitled screening (the better to truly sing along) and was won by two young kids dressed as "a needle pulling thread" and a guy dressed as a plumber--complete with a plunger--who told all 18,000 of us that he was "Christopher the Plumber" and that he'd been called in "because of a clog at the Hollywood Bowl." Big groan....

And then, before I knew it (both last night and at the Bowl), the Anschluss was on, the Von Trapps were singing in the music festival and then...they were gone.

Finally, my favorite scene: As the family high tails it out of the abbey to the Swiss border, the Nazis race to follow, but alas their cars won't start.

No, not quite. Just a pair of irreverent nuns with a little mechanical know-how doing their part to fight Nazism in 1938.

Way to go, sisters!
Posted by JanetheWriter at 10:52 PM No comments:

My parents’ first and only visit to Israel—as participants in an American Jewish Committee mission for academicians—was during the Christmas season in 1987, right at the beginning of the first intifada. It was the first time they left my sister, a college senior home on winter break, and me, a live-at-home young professional, “home alone.” All was well except for the State Department’s travel advisories and warnings about which we read every day in the New York Times.

When they finally called to wish us a happy new year, we were—in classic parent-child role reversal—nearly frantic with worry. They laughed, I recall. Giddy with delight in their whereabouts, my mother exclaimed, “We’re perfectly fine…we’ve nowhere near the violence and we've never felt safer. And, with all the menorahs in the windows, I forgot all about Christmas!”

I was reminded of this exchange this morning when, as I do each day, I perused Facebook to see what my friends are up to. This week, many of them are in Israel and here’s what they’ve got to say:

A young colleague from the Union: just arrived in Jerusalem and completely exhausted. Kotel for shabbat! Completely forgot it was Christmas . . .

A rabbi from the Midwest: We are going to Tel Aviv beach to meet Talia and Moti and Lihi. It will be Lihi's first visit to the beach.

A colleague visiting his newly engaged son: is looking forward to our big simcha today. The engagement party is in a few hours and we're really excited. Thanks to all for your kind words and congratulations. Shabbat shalom to everyone!

A rabbi from Westchester: Thursday was: Pioneers' Cemetery on the Galilee; Synagogue mosaic floor at Beit Alpha; lunch at Beit Shean; arrival into Jerusalem.

A first-year HUC student: had an AMAZING Christmas eve - midnight mass at the Church of Dormition right outside of the Old City, and a trip to Bethlehem with Amanda with an incredible taxi driver who was born and raised in Bethlehem - truly a once-in-a-lifetime experience! Merry Christmas!!

And finally this from a nearly finished rabbinic student: Thought I would avoid the American Christmas day shutdown by being in Israel. Forgot to factor in Shabbat in Jerusalem. Nothing open!

There've been no Facebook updates from Debbie Bravo and the Temple Emanu-El confirmation class, but no doubt they’re having such a fabulous time that they're just too busy to share their adventures in real time. No worries...I look forward to hearing about their trip once they’re back.

In the meantime, to all of you lucky enough to be in Israel at this season: eat a falafel for me.

Safe travels, my friends.
Posted by JanetheWriter at 8:29 AM 2 comments:

This past weekend I had a chance to experience so many simple pleasures: good friends, good food, a crisp, snow-filled afternoon, this wonderful city and hope about what the future might hold. 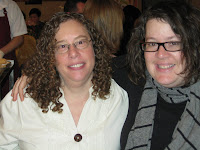 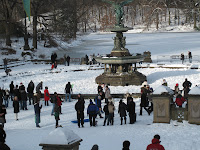 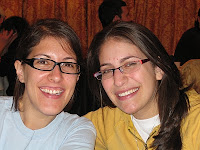 Posted by JanetheWriter at 9:06 PM No comments:

Back in August, I tried to convince you that I’m no Julia Child. And in fact, I’m not. Although my grandmother was a terrific cook and baker (as is my sister), I got kitchen genes from my mother who certainly can prepare a nice meal, but readily admits that when it comes to baking, if a recipe says “sift the flour,” she promptly turns the page.
A few months after the brownie baking adventure detailed here, a copy of Tina Wasserman’s new cookbook crossed my desk. It’s a beautiful volume and I was delighted to flip through the pages and admire the photos (and the people who I imagine actually pull off the recipes). When I do cook or bake from a recipe (which isn’t often), it’s usually from this cookbook or this one. If I’m really feeling ambitious, I might try an easy one from this volume, but even those push the outside of my envelope.
Needless to say, therefore, I was a little surprised at myself when, without really thinking about it, I responded affirmatively to the invitation to “share your cooking talents with your colleagues” at the Union’s upcoming Chanukah Party/Holiday Cook-Off being held tomorrow afternoon.
And so it was that earlier this evening, I came home and carefully – oh so carefully – followed the directions for slicing, dicing, chopping and seasoning to make this recipe for tomorrow's festivities.
And, lo and behold, just a few minutes ago, I took this pan out of the oven: 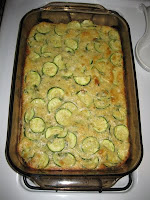 I must admit, if I do say so myself, that these zucchini squares do look (and smell) quite delicious. Let’s hope they’re a hit at the party.
Happy Chanukah, all!
Posted by JanetheWriter at 9:32 PM 1 comment: 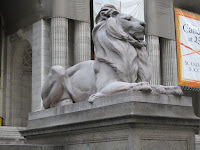 Neither patience nor fortitude has ever been my forte – and even less so during the last few months. That’s why I was especially struck this morning by the tranquility of the aptly named lions that grace the entrance to the New York City Public Library at 42nd and Fifth. (That's Patience up there on the left and Fortitude down below on the right.)

This Shabbat, may some of their serenity and repose descend upon those of us who need it most. 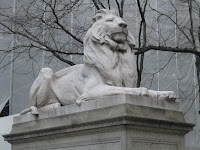 Posted by JanetheWriter at 10:58 PM No comments: 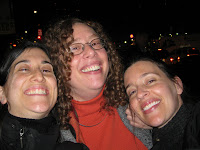 You know how in the beginning of The Wizard of Oz the picture goes from black and white to color? I sort of had that experience today as my I-met-her-once Facebook friend Phyllis went from a teeny-tiny, two-dimensional photo to a three-dimensional, live-and-in-person person in New York City.

Here’s how the events unfolded:

You may recall that last month at Biennial, I met Phyllis, who I’d previously known only on Facebook. (You can read about that encounter here.) In our blink-of-an-eye conversation in Toronto, she said she’d be in New York in December and we quickly exchanged phone numbers in the hope that during that trip, there might be time for coffee.

This past Sunday night, Phyllis posted this on Facebook: Phyllis is getting very excited for her trip to NYC this week! I commented with this: Where will you be? What are you doing? Time for coffee?

Last night, she updated with this: Phyllis can't quite believe that she booked a SIX AM FLIGHT for tomorrow morning. It's off to bed I go...

And early this morning this: Phyllis is headed to NYC!!!!! See ya in the Eastern Time Zone:)

As I was settling into my desk at work, she had already flown in from Chicago, was poking around in the Village and posted this: Phyllis is feeling like the Country Mouse. Facebook friends quickly advised her to wear black, to keep her camera out of sight and to purchase a scarf—to be tied in just the right way—from a street vendor.

Hoping to offer some explanation for the clothing penchants of New Yorkers, I chimed in with this: New Yorkers wear black because our closets are so small that we don't have room for a hundred different color schemes. Everything has to match...and so we accessorize with scarves we buy on the street! (Today, in fact, I happen to be wearing one that I bought at 42nd and Third for $5) :)

A bit later, having visited Magnolia Bakery for a cupcake, the Country Mouse from Chicago posted this: Phyllis is putting her faith in Google maps.

Shortly thereafter, my cell phone rang and it was the Country Mouse herself, asking if I could meet her downtown for coffee. Unfortunately, I was at work in midtown and due in a meeting in a few minutes. She promised to call again in the afternoon—when she and Leslie, a mutual friend, would be a bit closer—and I promised to duck out for a while to meet them.

I then went back to writing tribute letters, researching my next article for Reform Judaism magazine and, as one colleague is fond of saying, “serving in HaShem’s Army.” Phyllis and I spoke again in the middle of the afternoon and the three of us arranged to meet for dinner on the west side, near the theater where she and Leslie had tickets for a show.

Just before I left the office for Times Square, I posted this: Jane is excited about dinner tonight -- a totally unexpected and pleasant surprise! And pleasant it was! Without missing a beat (and over yummy Italian fare), Leslie, Phyllis and I picked up our chat in person right where we’d left it off in cyberspace. In fact, had the two of them not had to race off to make a 7 p.m. curtain, I suspect we might still be schmoozing over cappuccino--smiling, chatting, laughing and marveling at the amazing power of Facebook to bring us all together.
Posted by JanetheWriter at 10:33 PM 1 comment: