A Rundown on My New Job 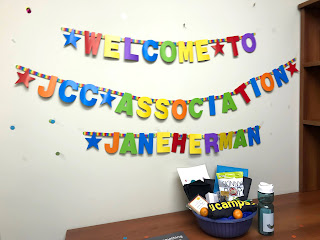 Remember when you taught nursery school at the JCC in Rockville, Maryland, back when it was still called nursery school and not, as it is today, early childhood education? I was reminded of that long-ago family connection to “the field,” now that I’m working as a senior writer for JCC Association of North America, the membership organization of JCCs, YM and YWHAs, and a network of summer camps across the continent.

It’s only been two weeks since I started, but the welcome I’ve received has been overwhelming and began almost from the moment I accepted the position, which I’d applied for right before Thanksgiving and accepted just before Christmas. From the signs and balloons that awaited me in my office to a first-day lunch out with my team, I have been bowled over by the warmth of absolutely every single person I’ve met thus far. What’s more, within a few days, all the new-employee paperwork was done, I was enrolled in a pension plan, my medical insurance card arrived in the mail, and my business cards were printed. Lest I forget, I have a complimentary membership to the 14th Street Y, and I can’t wait to go swimming. 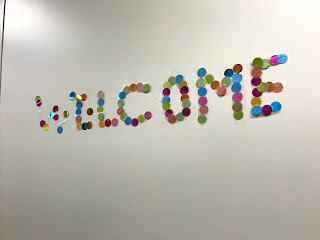 I’d met the president and CEO, Doron Krakow, during my interview, but he was out of the office traveling until well into my second week. When he returned, I heard him greeting people by name, asking how each person was doing, catching up on projects, and demonstrating a warm, leadership-by-walking-around style. When he stopped into my office (which, it seems, someone vacuums nightly), I received a most enthusiastic, warm welcome—including a hug—and we chatted for a few minutes. I told him, as I have repeated so many times in the last two weeks, “I’m thrilled to be here!”

As far as the work and my team goes, it’s all good. We meet weekly around a table, face-to-face, to review the status of all our projects, which are managed by Angela, the marketing administrator. Joanne, the chief marketing officer, heads up the team, and the other members include Loraine, the graphic designer; Morgan, the digital media marketing manager; Ben, the photographer/videographer; and Michael, who is a marketing consultant to JCCs. (His wife is a Reform cantor, and the Jewish geography as I am getting to know my new colleagues and they’re getting to know me has been fun. One woman, Yuliya, has a Gratz diploma on her wall, which sparked a great point of connection for us. She loves Dr. Davis the way you did!) 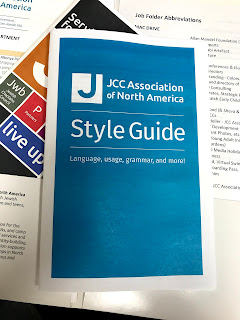 The marketing department functions as a service unit for all the other parts of the organization, and in addition to reading lots of materials to get up-to-speed, I’ve contributed to a few projects, including an update about JWB Jewish Chaplains Council activities. (JWB—Jewish Welfare Board—was established to support Jewish servicemen at the time the U.S. entered World War I and eventually merged with The Council of Young Men’s Hebrew and Kindred Associations, founded several years earlier, becoming the national association of JCCs and YM-YWHAs.) I’ve helped with Doron’s “Shabbat Shalom,” his weekly email message, drafted a joint letter from him and the board chairman to Federation executives, urging them to register for JCC Association’s upcoming biennial gathering, and also drafted an article for a lay leader that spells out the importance of attending this biennial event, known as JSummit. It’s scheduled for early May in Milwaukee, and I’m looking forward to being there.

A few more details to paint as full a picture as possible about my new gig: The offices, located on the fourth floor of an office building on Eighth Avenue, halfway between Port Authority and Penn Station, are lovely – with lots of oversized scenes from JCCs decorating the walls. It’s nice to be surrounded by joyful images of kids at summer camp, seniors in water aerobics classes, and preschoolers enjoying juice and challah in anticipation of Shabbat. (Yesterday, the staff had its once-a-month oneg, which, not unlike the pre-school celebrations, included a bit of singing; a micro d’var Torah; blessings over the candles, juice, and challah; home-baked treats; and a few minutes of collegial schmoozing.) There’s a beautiful conference suite; a number of offices leased to tenant organizations, including two in which the executive directors are former URJ/RAC employees; and a designated staff lounge, where people gather for lunch—and, again, someone cleans the refrigerator every single week.

All this by way of assuring you that I’m quite happy with my professional life these days—the work, my colleagues, and the mission and values of the organization—and, truth be told, proud of myself for (finally) having made this much-needed change. I think you would be proud, too.

P.S. If Brian’s name sounds familiar, you’re right. He and I were classmates at Laf Coll, and he preceded me as president of Hillel. When I told the now-retired Bob Weiner about my job and that Brian and I would be colleagues, he wrote back, “So happy and proud. Good Shabbos. Hugs and love, Bob.”

P.P.S. The JCC in Rockville is now the Bender JCC of Greater Washington, and from what I can see online, it appears to be an amazing facility.
Posted by JanetheWriter at 10:49 PM