King Reilly: A Treasured Gift From Our Hometown 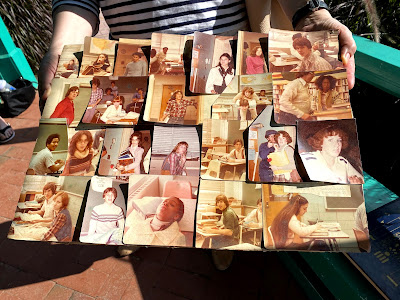 “Teaching is a very noble profession that shapes the character, calibre, and future of an individual. If the people remember me as a good teacher, that will be the biggest honour for me.”

Amy and I drove around Colonial Park a few times before we found the right gazebo. When we couldn’t find it immediately, my sister wanted to head back to Del Boca Vista, but I insisted we persist. In the end, we were glad we did.

In the gazebo, we met Eileen and Kathy, Mr. Reilly’s daughters, and one of his granddaughters, Kristen, as well as Chuck McCook, a fellow Franklin High School alum from the Class of 1980. Lovingly placed on the seats around the gazebo were the King’s FHS yearbooks from the 70s, 80s, and beyond, together with snapshots of students his daughters told us they’d found on the bookshelves in his basement “man cave.”

Immediately, Amy spotted me in the array of photos—wearing the same pink velour turtleneck I’d worn at my Sweet 16. We quickly identified others, rattling off their names as though we’d walked the high school’s halls with them just yesterday—Tommy Kimball, Carolyn Holmes, Carrie Hamilton, Andrew Schofer, Julie Goldman, Jimbo Allegro, Amy McGovern, Cory Nass, and Adam Weintraub. There were others, too, familiar as the backs of our own hands, but four decades have elapsed since the photos were taken, preventing us from whipping their names from the recesses of our middle-aged minds.

To the pictures and the yearbooks, we added our own reminiscences: the antics of “Reilly’s Raiders” and the classmates who participated;” hanging with King Reilly in his classroom until the “late bus” took us home; the outline sketch of the 13 original colonies on the chalkboard that began many an early American history lesson; hosting the King himself for dinner at 12 Webster Road on back-to-school night; and knowing, without anyone saying so, that Reilly’s classroom was a safe haven, long before that even was a thing. The kids who smoked in the courtyard, the hallway cacophony between classes, and our love for a school that, at the time, had a less than stellar reputation all made cameo appearances in our conversation.

From his daughters, we got a bit of the King’s prequel and sequel to our own high school years. He began his college career as a business major. However, after he was drafted during the Vietnam War and spent time as a file clerk in Korea, he changed his major to education upon returning home. Even though the switch meant lost credits and more time in school, his wartime experience had taught him that business and office work weren’t for him—and to our benefit, he acted on that knowledge. Kathy told us how, eager to get out of school for the day, she accompanied her dad to an early iteration of “Take Our Daughters to Work Day,” only to find herself in his classroom all day, listening to him tell the story of Hugh Glass’ mauling by a bear—not once or twice, but eight times during the course of the school day. He was good at storytelling, she said, and no one was embarrassed or thought the tale was dorky or dumb.

Following his retirement in the mid-1990s, he spent precious time with his family; the Palmyra High School Band Parents, who, thanks to him, added “and Grandparents” to the organization’s name; and the people of Ireland, whom he met when he backpacked and hitchhiked across the country from Galway to Dublin. All of them, like Amy, Chuck, and I, along with countless other Franklin students, are better for having crossed paths with King Reilly—and now members of his family—and will carry his life lessons and his indomitable spirit in our hearts always. They are among a trove of treasured gifts from our hometown whose value—and our appreciation of them—only increases with time.

P.S. One the the High Holiday sermons I read this season connected me to this NPR story from 2005. Although this wasn't a funeral, Amy and I were honored to share this special time and fond memories with King Reilly's loved ones.

Posted by JanetheWriter at 10:37 PM No comments:

How Framily Made Our Visit to Ojai So Magical 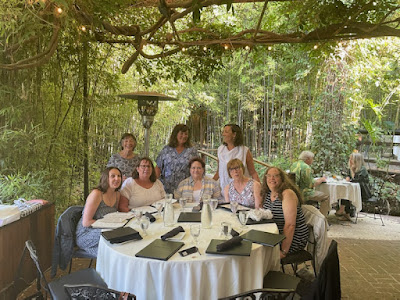 Once upon a time, in 1968, two little girls (one still in diapers) moved with their parents from New Jersey to Wheaton, Maryland. They didn’t know anyone who lived in Maryland, but their scientist dad had a new job at NIH, and the four of them lived in a garden apartment not far from Bethesda, where his office and lab were located.

Before long, their mom started to play bridge with other moms who lived with their families in the garden apartments. She met one mom from California who had three little girls, and the youngest was just a few months older than one of her little girls. Their dad was an engineer and a college professor.

The two families and the five little girls got to be friends. They befriended another family with a little girl, but her mom didn’t play bridge. They were from Baltimore, but had recently returned from Montana, where they’d lived near a Native American reservation where the dad had been a doctor with the U.S. Public Health Service.

The families did lots of things together, often riding into “The District” in the California family’s 1960 dark blue Chevy Nova station wagon. On the Fourth of July, they went to watch the fireworks on the National Mall; in the winter, they drove to see the National Christmas Tree, and in the spring, the beautiful pink cherry blossoms. The little girls from New Jersey loved to ride in the “way back” of the station wagon, look out the back window, and wave to the drivers behind them. It was much more fun than riding in their own black Chevy sedan with the “D.C. Last Colony” bumper sticker on the back.

The girls were in Brownies and Girl Scouts together, and when they weren’t in school or extra-curricular activities, they hung out together—playing Monopoly, Yahtzee, and hopscotch, riding bikes with banana seats, and sledding down snow-covered hills. The biggest girl, who could be very bossy (and hated raisins), sometimes bossed the littlest one around. The California family had a black cat named Troubles, and the New Jersey girls were afraid of him, especially after he scratched one of them on the nose. The Baltimore family had a parakeet whose cage sat on an old TV cart, and the little girl with the scratched nose liked to push the cart around the parakeet’s living room.

The New Jersey mom was a pre-school teacher at the JCC in Rockville, where the littlest girl went to school. Since the rest of the girls’ school day ended at lunchtime on Wednesdays (for teacher in-service training and development), the Baltimore mom watched the New Jersey mom’s older girl each Wednesday afternoon. The families pitched in to help out in other ways, too, like when one little girl had eye surgery and another had her tonsils out. (The little girl with the tonsils brought them home in a jar, and they sat on her dresser for a very long time.) 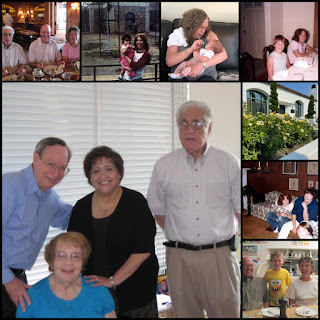 When the families celebrated Hanukkah and Christmas together, there often was homemade ice cream—from a hand-crank ice cream maker—for dessert. The girls also ate a lot of Spaghetti-O’s and Butoni toaster pizzas, even though the middles were always cold.
One year, when the Baltimore family was away—probably in Baltimore—the New Jersey mom and dad planned a Hawaiian-themed New Year’s eve party. For days beforehand, they cooked a lot of chicken and pineapple to serve over rice to their guests and decorated their front door with travel posters for Hawaii, full of people wearing leis and hula skirts. Unfortunately, it snowed so hard that night, only the California mom and dad, who could walk from their building to the next, actually made it to the party. After the New Jersey girls were fast asleep and all the leftover Hawaiian chicken and rice had been packed away, the two moms and dads smoked marijuana—probably for the first time, and maybe the only time—that the California dad had gotten from someone at the school where he taught.

In the summer of 1979, the New Jersey girls flew for the first time, when the family traveled to Los Angeles to visit the California family in Manhattan Beach. Together the two families visited Disneyland and Universal Studios, before the New Jersey family took off in their rented Datsun to visit San Diego, Ojai, and the Mohave Desert for a few days. Later that same year, the Baltimore family adopted a little girl, and the older New Jersey girl got to meet the baby only a few months later when she was in Washington, D.C. to attend a model United Nations conference for high school students. When the younger New Jersey girl attended law school in Washington, D.C., she visited the Baltimore family often. Her sister visited a few times when she was in Washington, D.C. for work.

Weddings, cross-country business trips, and Ma Bell kept the families connected throughout the 1980s and 90s, but never did all three gather in the same place at the same time. In 2002, the elder New Jersey girl, who lived in Los Angeles at the time, spent a lot of time with the California family in San Luis Obispo, while she got untangled from her marriage and prepared to return to the east coast.

In 2010, the New Jersey mom died, followed in 2013 by the Baltimore mom. We like to think that wherever they are, they’re together in a place that includes plenty of outlet malls and deep discount warehouses and that they’re riding around in a big ol’, gas-guzzling Chevy Impala with lots of room in the back seat and the trunk for whatever glassware, placemats, or other treasures they pick up.

When the pandemic hit, three generations of the California family’s girls—sometimes joined by a fourth-generation toddler—and the New Jersey and Baltimore girls began meeting weekly on Zoom for Bi-Coastal Happy Hour (BCHH). When the littlest girl, living in New York City, announced a business trip to Ojai, California, plans for an in-person reunion kicked in.

For a few days in mid-August, the California mom, the six little girls, and a daughter of one of the California girls had a magical time together in Ojai—catching up, celebrating, remembering, reminiscing, and planning for the next reunion.

The end… but not really.

Posted by JanetheWriter at 12:15 AM No comments: