These people, places and things (but nothing with a SKU or UPC code) are bringing me joy and gratitude this Black Friday – and all year long.


Despite my love-hate relationship with the city – its noise, crowds, transit system, and other offerings, good and not so good – there’s nothing quite like helpful New Yorkers, bodega coffee, or crossing 23rd Street against the light on a holiday morning when New York shows us its quiet side.


From crunches to rowing, lifting to running, boxing to jumping, the two hours I spend under William’s guidance each week make me a partner in caring for my body, building physical and emotional strength, and expanding my world with a small view into the life of an Ecuadorian immigrant family.

3. Health and the insurance to help guard it


A visit to the Evelyn H. Lauder Breast Center at Memorial Sloan Kettering Cancer Center right before Thanksgiving each year not only reminds me not to take my health for granted, but also to remember the hundreds of people who, whether they know it or not, play a role in ensuring my inherited genetics don’t determine my destiny.

2. The minyan at Temple Shaaray Tefila


In a large congregation, it’s a blessing to slip into “my pew” on most Saturday mornings and to connect to the people around me, and the prayers, music, and rituals that will unfold in the coming hours. Torah study, too, connects me to my (ancient) people, unchanged by the millennia, but ever-changing because of my own new perspectives, knowledge, and “ah-ha” moments.


More than an individual's presence, it is the love, support, joy, laughter, humanity, honesty, attention, time, and more that we share with one another that makes my life rich and full. Thanks to the people in my village and in my world – near and far, new and not so new, known and unknown – I truly have everything I need.
Posted by JanetheWriter at 12:44 PM

Laughing Uncontrollably in the Cemetery 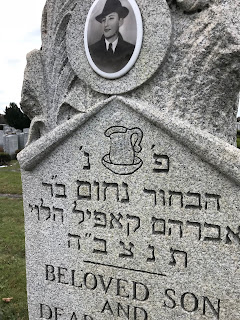 We owe you an apology. We didn’t mean to laugh with such abandon at your grave yesterday, so please let me explain.

It was my mom’s birthday and we were visiting her grave, just a row over from yours, when my sister noticed the back of the tall, sawed off tree trunk that is your gravestone. (To be honest, I don’t know why we never noticed it before, since we’ve been visiting at the site since the mid-1980s, when my grandfather was buried directly opposite where my mom’s grave is now. Of course, my sister says we have better Visual Intelligence these days, and she may be right.)

In any case, when we were finished visiting my mom and her parents, we wandered over to the front of your tree trunk, which my dad told us often symbolizes a life cut off before its time. In fact, you were a mere 28 years old when you died in 1943. We studied the stone which holds a black and white image of you, wearing a large fedora-style hat. Indeed, you were a handsome guy. My father told us in his experience, it’s often Russians who place photos on gravestones such as is on yours. Perhaps you were Russian…perhaps not.

In any event, I also noticed the pitcher and bowl engraved on your tombstone, which is when I said out loud, “I wonder what the pitcher means.”

My dad, despite his new hearing aids, thought I was asking about the picture and replied, “It’s Russian.”

“No, the pitcher,” my sister said, giggling, “not the picture! Jane’s the last person who would mispronounce in that way.”

With that, we all exploded into peals of laughter. It was the kind of laughter that makes tears run down your face and the more we laughed, the less we could stop. It’s a good thing it was Shabbat and there was no one around.

We truly meant no disrespect.

Back in the car, once the giggles finally subsided, I texted this to a rabbi friend: “What does it mean when there’s a pitcher on a gravestone? Today’s my mom’s b’day, so we were at the cemetery.”

The answer came in bits and pieces: “Levite.”

“They were the carriers of water in the ancient Temple and thus were symbolized by the pitcher. It was the pitcher of water used to wash the hands of the Cohanim.”

So, you see, that’s how we came to laugh so uncontrollably at your grave. In addition to our apology, though, I think we owe you our thanks, too, for bringing us a bit of joy on a gray, sullen Saturday.

I suspect we’ll visit your gravestone again whenever we’re in the cemetery and that it always will bring us a sweet memory. In the meantime, rest in peace Nathan Finkelstein.