Back in April on this blog, I considered using the following haiku as a personal ad, but ultimately rejected the idea:

In response to that post, my friend Larry Kaufman wrote this:

If you post haiku
Maybe you'll get a call from
Someone Jewpanese.

Yesterday, inspired by Rabbi Joe Black’s Facebook status (Standing at the mountain. Lots of smoke and noise.), I wrote and posted the following haiku as a personal ad:

Saw you at Sinai
Celebrating that day now
Should we reconnect?

Sadly, the responses have been scarce and not exactly on target. With just one exception, these guys probably weren’t even at the smoky, noisy mountain oh-so long ago.

Guy #1, while he may be a perfectly nice guy, describes himself as Indian American. Like I said, not exactly on target…

Guy #2, apparently burned by an underage internet dater, wanted me to verify my age using AgeProtect. Um, no, I don’t think so…

Alas, reconnecting with someone from the mountain doesn’t seem like it’s going to happen anytime soon. Perhaps another haiku is in order:

‘Twas crowded up there
Lots of guys to choose from then
Where did they all go?

Posted by JanetheWriter at 8:51 AM No comments: 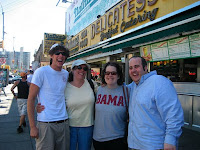 Last summer a few friends and I, none of whom had ever been to Coney Island, decided that we better get ourselves there before Astroland – and most especially the Cyclone -- closed forever. By the time we could all agree on a date, it was August, but we made it nonetheless. You can read about our adventure here.

Recently, with the Memorial Day weekend approaching, we casually talked about planning similar outings for this year, tossing out such possibilities as a day at the Brooklyn Botanic Garden, a trek to root for the Staten Island Yankees, or a walk across the Brooklyn Bridge.

Call it what you will, but since today’s “On this Day” from Britannica Online tells me that today – May 24, 2009 – marks the 126th anniversary of the opening of the Brooklyn Bridge, I’d call it kismet—and suggest to my friends that a summer stroll across this wonderful span should be our first order of business (once we agree on a date). As we saunter, I’ll be able to regale them with tidbits about the bridge, its construction and the personalities that made it possible from my many-years-ago reading of John McCullough’s book on this very topic. And, while I’m remembering that great read, we’ll be creating some great memories of our own. Good friends and good times in a great city…what could be bad?!

So, to my let’s-explore-the-city buddies, I say: Whadda ya say, guys, should we try to find a date? And to the rest of you, I say: “As always, thanks for reading, and stay tuned for more about our summer adventures.”
Posted by JanetheWriter at 10:24 AM No comments:

So, do you think if Myron Scholes or Paul Krugman stepped in to sit for my economics final tomoorrow night anyone would notice?

Yeah...like I could make that happen...
Posted by JanetheWriter at 8:08 AM No comments:

I may not have time to write much these days, but I did manage to find a bit of time to relax and unwind with words last night.

Check out my finished Bananagrams puzzle, which uses every single one of the game's 144 tiles: 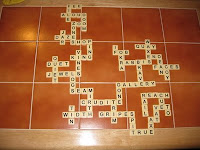 I'm addicted!
Posted by JanetheWriter at 8:26 AM No comments:

With my economics final just four days away, I've not had a lot of time to devote to writing for this blog. I do have a new post up on the Union's blog, though, and hope that you'll pop over there to read it.

Once the exam is over (9 p.m. on Tuesday night), I'm looking forward to getting back to more pleasant pursuits -- sleeping in on the weekends, soaking in some city sights and sounds, writing leisurely, checking out my new synagogue, and reading some good books. Any suggestions on that front?
Posted by JanetheWriter at 2:00 PM No comments:

So Much to Write...So Little Time

We're short staffed in the office, my three-hour, in class economics final is less than two weeks away and on top of all that, I've managed to squeeze in a few marches in the "schmuck parade." Needless to say, I'm burning the candle at both ends at the moment.

Earlier today, though, I did carve out a bit of time to craft a post for the Union's blog that I'm sharing with you here.

I hope to get back to this one soon. Thanks for reading.
Posted by JanetheWriter at 10:21 PM No comments: