No Chair for a Queen

In a Facebook message yesterday, one of my friends, in trying to arrange a time to visit said, “You're the queen, and you can decide when to hold court!”  Although that may be true at the moment, this is no chair in which a queen should hold court: 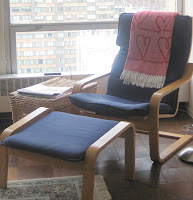 On the best of days, it’s not the easiest from which to rise.  And now?  Fuggedaboutit!
Posted by JanetheWriter at 8:50 PM No comments:

Since I’m going to be spending so much time in my home, sweet home during the next few weeks, I thought I’d invite you in to have a look around--especially since I cleaned and vacuumed yesterday and the place is as shiny as the top of the Chrysler Building.

For starters, this is the mezuzah that greets you at the door. 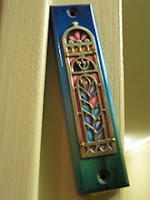 Of course you’ve already seen it since it also greets you at the door of this blog.

Once inside, you’re in the dining area.  I’ve shared lots of good times in this space with family and friends and am looking forward to many more in the coming year. 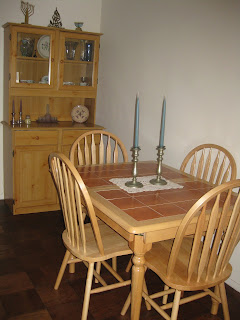 Just past the dining area on to the left is the galley-style (but good size, by New York standards) kitchen. (If anyone knows how to display these two pictures side-by-side, I'd love to hear from you!) 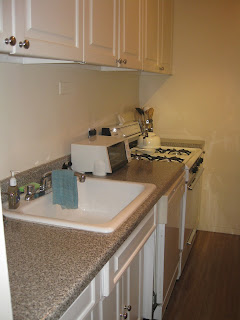 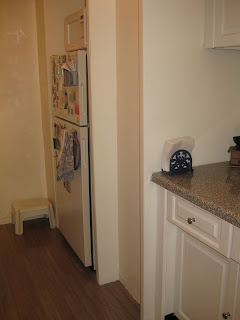 Further on is the living room. 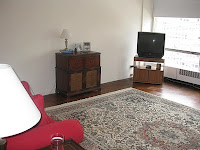 The television is my least favorite part of the room...although there are times when I do like to lazy about on the couch and watch. 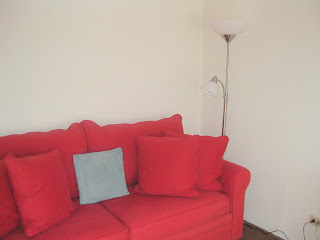 Far more interesting than the TV, I think, is the Stromberg-Carlson radio that belonged to my grandparents.  It's a radio (from the pre-FM days) and a phonograph player.  Tucked into one of the musty storage sections are some old (are there any other kind?!) Enrico Caruso recordings. My mother always used to say that she remembered the radio from when she was a very little girl.  I wouldn't be surprised if they all used to gather 'round it to listen to Franklin Roosevelt's fireside chats. 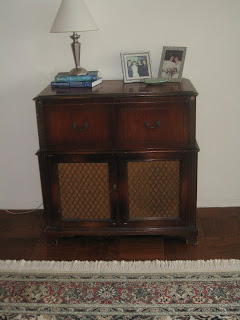 By far, my favorite part of the living room is what I always refer to as my reading nook.  Here's where I'd like to spend much of my time in the next few weeks. 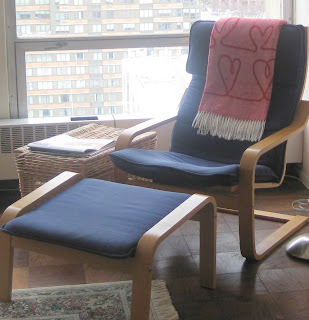 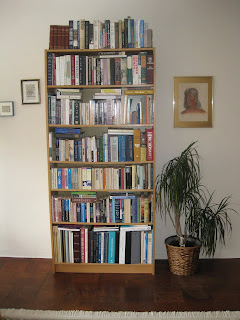 The bedroom and the bathroom round out my home, sweet home. 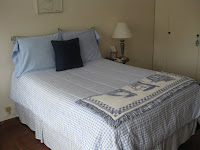 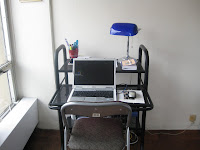 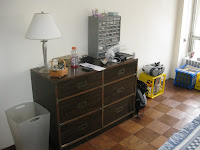 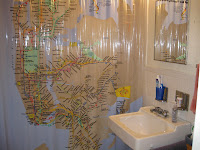 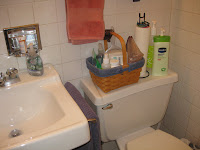 Welcome…hope to see you soon!
Posted by JanetheWriter at 12:24 PM No comments:

A Boatload of Brisket

If you read my last post, you know I’ve got a freezer and fridge nearly full of food in anticipation of hunkering down to recuperate for a few weeks.

Let me tell you in particular about the brisket…

The Fresh Direct order I received on Friday was to have included cubed beef for stew.  I thought the meat in the package would look like this:

Instead, when I opened the box with the meat in it, it looked like this:
No joke, it must have weighed 10 pounds and I had no idea what to do with it.

A quick call to my sister helped me determine that it was a huge piece of brisket and that I should do the following:
I completed steps one and two above on the spot and, earlier today, battled snow and wind to get to the supermarket to buy a jar of chili sauce, a six-pack of Coke (not diet Coke), and a box of onion soup mix.  (Had I know the brisket was coming I would have, of course, ordered these from Fresh Direct, too.)

When I got home, the meat, one can of Coke, one envelope of onion soup mix and the jar of chili sauce went into the crock pot, and I turned it on to “low.”  In about eight hours, voila:  I’ll have brisket and gravy to add to the stash of food in the freezer.

Thanks, Amy, and thanks, Fresh Direct!
Posted by JanetheWriter at 4:52 PM No comments: 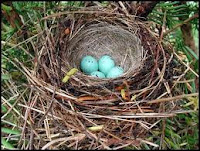 Last night I started to nest.

According to Merriam-Webster’s online dictionary, the definition of nesting is “to build or occupy a nest, to settle in or as if in a nest.”

And, although I’m certainly not pregnant, the description of nesting from Mama’s Health seems especially apt:  “Nesting is the term used to refer to an expectant mother’s instinct which gives her a surge of energy which prompts her to clean and do various chores around her home. Nesting usually arises as the mother nears her due date.”

It all started with the Fresh Direct delivery that arrived a little bit before 7 p.m.  Totaling nearly $200 (which is more than double the cost of most of my orders), it included, among other things, eight rolls of paper towels, a dozen rolls of toilet paper, a box of powdered laundry detergent, two dozen bottles of Gatorade, Jell-O, chocolate pudding, peanut butter, a box of Clementine oranges, olive oil, mint chocolate chip ice cream, bagels, apple juice, diet Coke, ginger ale, yogurt, salsa and chips, hummus, potatoes, onions, pasta, rice, beans, corn, diced tomatoes, and enough meat for more than one crock pot brisket.

Opening the freezer to put the frozen foods away, I found a jumble of unidentifiable packages and containers that were, as my mother always used to say, “from the year gimel.” Although they had never bothered me before, all of a sudden, they had to go.  And they had to go now.  So I started tossing:  ice-encrusted turkey bacon, a foil wrapped, plastic-bagged something or other, leftover lentil chili from last January, a started bag of frozen pineapple from Trader Joe’s (I don’t remember the last time I was in Trader Joe’s), hot dog buns that I may have moved here from my last apartment (I’ve been in this one for two and a half years), and a box of frozen veggies that were most likely picked when the Green Giant was still a little sprout.  With all that "stuff" out of there, there was plenty of room to neatly stack the new groceries among the freshly made containers of homemade soup, veggie lasagna and baked goodies that friends have thoughtfully and lovingly prepared for me in the last several weeks.

The same thing happened in the pantry cabinet.  Out went stale nuts, a box of Parmalat milk with a 2008 pull date, a box of matzo that the Israelites probably baked, a partially used bag of rock-hard dried cranberries, and a few potatoes with very big eyes.  After that round of tossing, I rearranged the canned goods, grouping them together by type, aligned the various boxes of rice, mac and cheese, cereal and pasta based on box size, and repackaged some opened bags of dried beans and pearl couscous in uniform, stackable plastic containers.  Martha Stewart would be proud.

After that, Tuesday should be a breeze.  Fueled only by the calories consumed in clear liquids, I’ll run down to the library at Baruch (it’s closed until then) to print something out, returning home (to a sparkling clean apartment!) in time to await two separate phone calls from the hospital—one to review the events of the next day and one to let me know what time to arrive.  A Hibiclens shower—and hopefully some sleep—will round out the day.

Whew…after all that, I’ll really need those six weeks of R&R that are coming my way!
Posted by JanetheWriter at 1:14 AM No comments: 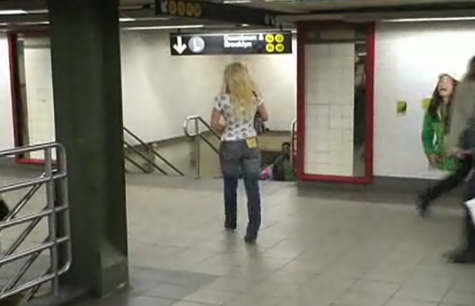 I know this is a terrific city and that you’re a great bunch of folks, but your behavior in the subway (actually it’s just in the subway station) sometimes leaves a bit to be desired.  Although you’d never know it to look at me, I don’t have a whole lot of depth perception and as a result, walking down a flight of stairs (or even two or three of them) without holding on to the banister is tough for me.

Therefore, I’d be extremely grateful if you would please refrain from:
If you need to do any of those things, please wait until you’re at the bottom of the stairs and then step out of the flow of traffic.  We’ll all thank you.

For those of you waiting in Penn Station for a train to the ‘burbs, I know there’s not a whole lot of seating there, but the steps aren’t chairs either.  Please don’t use them to rest your tush while you eat a bagel, drink your coffee, use your iPad or just stare off into space while you wait.  When you do these things, you create an unnecessary hazard for both of us since—unlike most people—I can’t just let go of the banister to go around you.  And, besides, you’re going to be sitting on the train in a few minutes anyway, so what’s a little standing around until your track is posted?!

P.S.  One more thing:  For those of you who take the bus, might it be possible for you to dig out your MetroCard while you wait for the bus instead of when you're standing in front of the fare box holding up the rest of the line?  Thanks!
Posted by JanetheWriter at 11:00 PM No comments:

Whose Blood is It Anyway?

This morning on my way into the office, I stopped in at a Quest Diagnostics Lab to have blood drawn.  (Next week it’s back on the medical merry-go-round for me.)  Thankfully, the place was empty and even without an appointment I was in and out in about three minutes.

It occurred to me on the walk to work, though, that aside from printing my name on the clipboard at the front window, verifying my address, and signing and printing my name on a form where the phlebotomist pointed, he had no way of knowing that I was truly the person I claimed to be.

Although I would not ever consider doing it, the whole episode did make me wonder what (aside from the moral imperative to do the right thing) would prevent me from sending a marathon-running, 20-something who is genetically predisposed to low cholesterol to provide “my” blood?

I’m just sayin’…
Posted by JanetheWriter at 10:38 AM No comments:

The Blessings of Wind and Rain

Earlier this week, I wrote about my kaddish community.  You can read that post here.

Since then, the worst wildfires in Israel’s history have wreaked havoc on land and communities in the north, and have taken more than 40 lives.  No doubt when my kaddish community gathers together tomorrow morning in the Morse Chapel at Temple Shaaray Tefila, these words from the G’vurot—Mashiv haruach umorid hagashem (You cause the wind to blow and the rain to fall)—will resound especially loudly.

This Shabbat, may God bring rain to Israel’s parched, fire-ravaged land and healing to her people.  Amen.
Posted by JanetheWriter at 1:57 PM No comments: