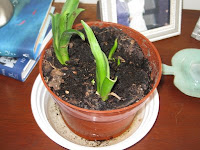 In the meantime, whether or not they do, I am awed by this plant, by the power of green, by the rebirth of the earth – even in a small plastic pot in my apartment in Gotham – and by the eternal promise of springtime and new beginnings.
Posted by JanetheWriter at 11:24 AM 1 comment: 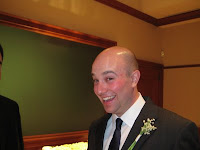 No, I haven't forgotten about my blog, but, like the butcher who backed into the meat grinder, I've gotten a little behind in my work here. (I know, that was bad!) However, it's not far from the truth. Between the wedding in Tulsa over the weekend (that's the groom there on the left), and the economics midterm tonight, I haven't had a minute free for writing. I promise to get back to it in the next few days...by the weekend for sure.

In the meantime, here are some not-so-great photos from the weeekend in the midwest. The wedding could not have been nicer and it was good to get away, to hang with friends (old and new), and to celebrate the promise of a new beginning. 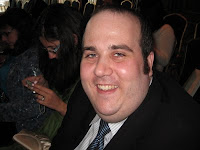 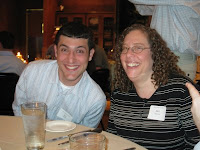 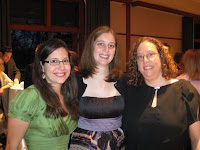 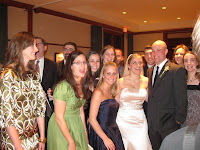 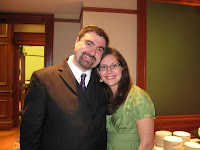 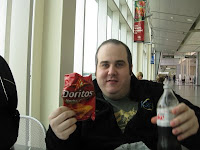 Posted by JanetheWriter at 10:50 PM No comments:

Today was perhaps one of the most difficult days of my professional life. Although I still have my job, many of my friends and colleagues at the Union for Reform Judaism were not so lucky. “Sad” and “emotionally exhausted” don’t even begin to scratch the surface of how we – individually and collectively – feel.

And so I’ve turned to “comfort music.” Pouring from my iTunes tonight as I go about the chores of the evening are the ballads of Billy Joel, Barry Manilow, the Carpenters and Harry Chapin, among others. And, although the songs can’t take away all the pain (or substitute for my favorite comfort foods -- chocolate pudding and mac and cheese), I do know all the words, can sing along (off key and loudly!), and, even if just for a little while, escape to simpler days and happier times.
Posted by JanetheWriter at 8:56 PM 1 comment:

Having spent a fair bit of time in the last few days on Bloomingdale’s wedding registry web site and in an IM chat room with two friends trying to decide upon a we’re-going-in-on-it-together wedding gift for two other friends who are getting married next weekend in Oklahoma, I was interested to read this article in today’s Style section of the New York Times.

The groom is a regular reader of this blog so I can’t reveal the various gifts we’re choosing among, but in the next few days, my friends and I definitely need to make a decision and purchase the gift. I know…technically, we have a year, but I’m a yekke (which basically means that I believe that things are meant to be done in a certain order, and that's the order in which I do them!) and before I board that Tulsa-bound plane on Friday, I want “wedding gift” to be crossed off the “to do” list.

Stay tuned for progress on our decision and the runners up, and perhaps a post or two from the Sooner State…if I decide to schlep my computer.
Posted by JanetheWriter at 9:59 AM No comments:

Email ThisBlogThis!Share to TwitterShare to FacebookShare to Pinterest
Labels: weddings 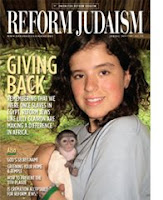 A pulled back muscle, an expired ATM card, a chipped filling, the tragic death of a teen in the Reform Jewish community and a little stress in the office, where 20 percent of the staff is to be laid off in the next few weeks all seem to have stolen the muses from my soul this week.

On the good news front, the latest issue of Reform Judaism magazine is hot off the press. Take a browse through...including the new section, “News and Views of Reform Jews,” which includes my first-ever article in the magazine, Action: Blueprints for Green Living.

Enjoy!
Posted by JanetheWriter at 9:29 AM No comments: