A few of my sister’s friends, ensconced in communities bereft of mah jong players, often play online.  Although I don’t personally participate to this type of game, last night I came close…on Facebook.

It all started when my friend Scott, still home in Houston following Thanksgiving, posted this as his status update:  coming soon: www.overheardatmahjong.org.  (Don't try to click on this faux link...Scott made it up!)

In Facebook comments among Scott and his friends, the following conversation ensued:

Scott:  I am upstairs at my parents’ doing work and it's mah jong night downstairs!

On erev Thanksgiving, perhaps more than on any other night during the year, we take stock of our many blessings.  And, despite the sadness and loss my family’s experienced this year, we, too, have much for which to be thankful:

We—my father, my sister, Ian and I—have each other and our precious memories.  Modim anachnu lach.

We have an ever-expanding network of family and friends—near and far, old and new—who call, keep in touch, check in with us, hold our hands, prop us up and propel us forward as we stumble through this year of mourning.  Modim anachnu lach.

We have comfort in knowing that we always abided by my mother’s wishes and that in her last days she was surrounded by loved ones, music, dignity, and peace.  Modim anachnu lach.

We have the work of our hands—that not only challenges our intellect and buoys our spirits, but also betters our world.  Modim anachnu lach.

We have key information that gives me a shot at life that my mom didn’t have.  To honor her memory, I am compelled to make the most of this gift.  Modim anachnu lach.

Happy Thanksgiving to all!

* We give thanks to You.
Posted by JanetheWriter at 9:52 PM No comments:

BRCA SCHMACA: This is Serious Business

Before you were “born,” I had a laparoscopic cholecystectomy (doc-speak for surgical removal of the gallbladder) and after it was all over, I sent this note to my terrific surgeon:

Before my life returns to the pace it was before my recent surgery, I want to thank you again for the outstanding medical care you provided and for the many kindnesses you demonstrated to me and my family throughout this entire unanticipated adventure.  I will be ever grateful to you for all that you did and, although I hope not to need a surgeon again anytime soon, you will always be at the top of my list!

With gratitude and thanks,
JanetheWriter

As it turns out, “anytime soon” is now…

A few weeks after my mom died this spring from breast cancer, my sister and I, given our family history, opted to pursue genetic counseling and testing for the BRCA (BReast CAncer) gene mutations, which are common among Ashkenazi Jews (too much inbreeding in the shtetl).  Although my sister's test results were negative, mine were positive for 6174delT, a BRCA2 gene mutation that significantly increases my lifetime risk of both breast and ovarian cancer.

In September, I consulted with a scalpel-happy surgeon at Mt. Sinai referred to me by my gynecologist.  Sadly, if the guy had had a scalpel handy, I’m fairly certain that I’d already be without a lot of body parts.  The fact that I told him right from the get-go that I was just doing my homework and not prepared to make any decisions at the moment didn’t seem to register with him.  Neither did the fact that I’ve never been pregnant ("nulligravida" in doc-speak).  He asked me about it three times (yes, three times!) in 10 minutes.  By the third time, I wanted to say, “No, I’ve never been pregnant, just like I told you the last time you asked, and the time before that, too.”  Of course I didn’t say any of that…

Six weeks later, after submitting reams of paperwork, including my positive genetic test results, I met with a genetic counselor and the chief of the clinical genetics service at Memorial Sloan-Kettering Cancer Center.  Back in 1995, he headed up the team that discovered the 6174delT mutation so he knows a thing or two about all that inbreeding in the shtetl ("genetic drift" in doc-speak).  Nearly three hours later, I left there with a handful of referrals (all their “favorite people,” they told me) and deep confidence that I'd finally found a team of competent, caring professionals who will make sure that whatever decisions I make—now and in the future—will be the right ones for me.

Now, I visit doctors like an octogenarian.  Last week it was the surgeon who’s going to do a laparoscopic, robotic TLH-BSO (how’s that for doc-speak?!) on December 29.  Although it’s generally a same-day procedure, and I expect to be up and around sooner, the anticipated recovery time is four to six weeks.  Yes, four to six weeks…yikes!

From my perspective, though, the oophorectomy (the “O” in the BSO above) is a “no brainer” because ovarian cancer is nearly impossible to detect in its early stages.  Same with the hysterectomy (the “H” in the TLH above) not only because I certainly don’t need that particular equipment at this stage in my life, but also because Tamoxifen, a chemotherapy drug that’s effective in preventing breast cancer and may be an option for me, carries an increased risk of uterine cancer.  Talk about a Catch-22…

As for the rest, next week I’ll see the medical oncologist who focuses on high surveillance and frequent testing of people with hereditary cancer risk but no disease.  I hope this guy and I can become BFFs (with heavy emphasis on the second F), but I’m well aware that should my circumstances change, it may become necessary to take other, more proactive steps and, for the time being, I’m comfortable with this plan.

To be continued…
Posted by JanetheWriter at 7:59 PM 2 comments: 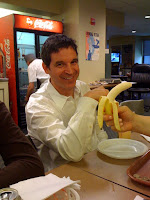 Since July, I’ve been going to Torah study weekly.  Needless to say, I’ve learned a lot of Torah, from both the other participants in the group and from the rabbis and cantors who lead the minyan and teach our class.  You can read a bit about each of these folks here and here, here, here and here.

I’ve learned a lot of other useful things from rabbis too:

From this one, I learned a multitude of things:  the proper way to don a tallit, the hows and whys of cleaning under your fingernails before immersing in the waters of the mikvah, and the best toys for a brand new aunt to buy her nephew.

From this rabbi, I learned how to play mah jongg.

From this one—who serves as my own personal “Ask the Rabbi” in the office—I’ve learned too many things to list.  The one that sticks with me most, though, and has been reinforced repeatedly in recent weeks is the unbearable anguish and pain that go along with being a gay teen.

This one introduced me to the wonders of the iPhone, and from this one I learned that my father’s not the only person who thinks that peanut butter and Swiss cheese makes a good sandwich combo.

This rabbi taught me the value of pondering a question from multiple angles before penning a reply, and this one reminded me, yet again, just how small is our Jewish world.  In light of this fact, she followed up with this oh-so wise gem:   Never, ever talk about someone while in a public restroom.  As she says, “you just never know how people are connected!”

Three summers ago when I found myself in Prague without any luggage, this rabbi taught me the secret of rolling wet clothes in a hotel towel and twisting it tightly to get most of the water out quickly.  More recently, he shared a trick he learned during his congregational days to get wax out of carpet:  cover it with a damp towel (but not the same one you used to dry your clothes!), run a warm iron over the spot and, voila, up comes the wax and the carpet’s as good as new (or at least as good as it was before the wax mishap).  Most endearing of all, he taught a mutual friend (who then taught me) to peel a banana from the bottom—the way it’s done in the jungle—instead of from the top, providing a convenient handle for the snack.  Needless to say, I’ll never eat a banana the same way again.  Whenever I start to peel one, I’ll think most fondly of this teacher and so many others from whom I've learned so much!
Posted by JanetheWriter at 7:27 PM 3 comments: