I Wasn’t Sick, But the Community Helped Me Heal 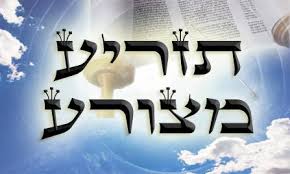 Tonight’s Shabbat service at Temple Shaaray Tefila used bibliodrama and storytelling to explore the themes of illness, healing, loneliness, and community associated with this week’s Torah portion, Tazria-Metzora. I was honored to share my personal story of healing as part of the service.

Thank you, Rabbi Lenza… I’m honored to speak to you tonight.

As I was thinking about how to share my story of illness – which wasn’t really illness at all – and the healing that followed, I realized it’s not only my story. It has everything to do with how this community responded and so, this is really our story...and it goes something like this…

In the spring of 2010, my mom died from aggressive breast cancer that ravaged her body in seven weeks’ time – literally from Pesach to Shavuot. During those weeks, even before my story began, Rabbi Stein called me regularly, just to check in.

That summer, my sister and I got genetic counseling and testing for BRCA mutations. Indeed, a genetic mutation had been lurking in our family for generations. And, it had been passed along to me – significantly increasing the chance that in my lifetime, I would get breast, ovarian, and/or pancreatic cancer, as well as melanoma.

An emotional roller-coaster ride ensued. At each turn was another doctor’s appointment, more reading and research, and intense loneliness. Still mourning my mom, suddenly I was a member of a club I never even knew existed – and I didn’t know anyone else who belonged.

I wasn’t sick, but if I wanted to stay that way, I needed to educate myself and make some tough choices, choices that were made more difficult precisely because I was healthy. I was playing Russian roulette...and I’m no gambler.

I’d recently been attending the chapel minyan to say kaddish for my mom and I shared my news with a few people in the group. (It’s here that my story and the congregation’s story became one.)

Four months later, I had the first of several preventive surgeries, skipping minyan for about five weeks while I recovered. During those weeks, Jesse Berger, whom I didn’t know well, called to see where I’d been; Brigitte Sion, challah in tow, came to visit on a Friday afternoon.

With their acts of kindness and those of others in this community, I felt anything but isolated. Even now, all these years later, recalling those gestures warms my heart.

Again, in July 2011, I disappeared from minyan – this time for more extensive preventive surgery that kept me in the hospital for five nights and out of commission until the fall.

As before, calls, visits, and well wishes, from the community and clergy helped sustain me. I was pleased to join what I dubbed (and this is a little PG-13) the “Sisterhood of the Traveling Bras,” whose comfy, post-surgery under-things were loaned to me by a Shaaray staffer who, as a fellow mutation carrier, had already been down this path. She knew exactly what I’d need while I recovered. When I returned to minyan after weeks away, the welcome I received fed my soul in ways that have stayed with me.

It’s been almost seven years since my most recent surgery. Although physical and emotional scars remain, I am healthy – and doing everything I can to stay that way. I’ve recently enrolled in a clinical surveillance study designed to advance early detection of pancreatic cancer among those at highest risk.

My experiences have made me an activist in the hereditary cancer community, particularly committed to raising awareness about inherited genetic mutations, especially in families like mine, where flawed genes often remain hidden until somebody dies.

If you remember nothing else from this story, please remember this: BRCA mutations are considered rare, present in the general population in approximately one in every 400 to 800 people. In the Ashkenazi Jewish population, though, one in 40 of us – both men and women – carries a mutation, and 90 percent of carriers are unaware of their status.

If you want to know more, let’s chat during the oneg Shabbat.

In the meantime, I’m so grateful to this community, and especially to the members of the minyan, for the concern, support, and kindnesses they showed me during my “non-illness” and recovery – and for the caring, kindness, and camaraderie I believe we show each other from week to week as we deal with the ups and downs in our lives.

Thank you and Shabbat shalom.
Posted by JanetheWriter at 11:20 PM 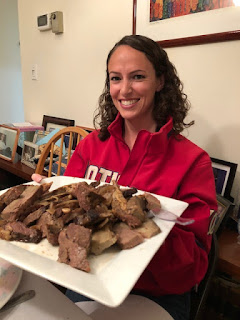 Because there are no rules for #BlogExodus and because I often need time to process and percolate my thoughts, I believe it’s okay to write this last entry now, on the second day of Passover. If so, I wish to offer praise:

To the people who welcomed me into their homes over the last two nights for seder, in one instance for the umpteenth time, in another for the first time. In both cases, all of us who gathered, benefitted from gracious and generous hospitality, engaging company, wonderful food, lots of laughter, and the opportunity to retell the story of the exodus from Egypt, sharing and celebrating Jewish tradition together.

For growing and ever-intersecting and connecting circles of friends.

For musicians – cantors and professional singers – whose sweet voices enriched the journey from the narrowness of Mitzrayim.

For Rabbi Jim Rudin for his reminder that this year, 15 Nisan marked the 75 thanniversary of the Warsaw Ghetto Uprising, and also for pointing out the beautiful full moon as we headed back into the city, following the first seder.

For MetroNorth trains that run relatively on time.

For Elmo and for his knowing 13, so he could, as has become his own holiday tradition, help with Echad Mi Yodea.

For my friend, Pamela, and our new-ish holiday tradition that affirms our decisions to choose life and confirms that some of what makes Passover Passover has little to do with brisket, matzah, or Manischewitz.

For the blessing of memory that allows us to remember with love those who live in our hearts, even if they’re no longer physically with us around the table and for the power of that first bite of wet matzah spread with sweet, whipped butter to open floodgates to the past – and decades of Passover memories as sweet as the butter.

For Elijah and his enduring ability to keep hope alive – for whatever our hearts desire and for a more equitable and just world that is our responsibility to help build and create.

Inspired by Ima on (and off) the Bima , this post is one in a series marking the days of the Jewish month of Nisan leading up to Passover, which begins at sundown on Friday, March 30, corresponding to the Hebrew date 15 Nisan 5778. If you want to play along, check out this year's #BlogExodus and #ExodusGram prompts .
Posted by JanetheWriter at 11:02 AM