On the Sunday of Thanksgiving weekend, I updated my Facebook status:


Although you cannot escape your genes, they certainly can widen your world.

I'd just gotten off the phone with Ed, a second cousin, who was recovering from a mastectomy he'd had five days earlier.  He'd called to set a date to meet for dinner and we settled on Wednesday of the coming week.  Each of us was eager to, as he'd suggested in an email to me, "get together sometime soon, whether to discuss the effects of breast cancer, or just to become friends rather than somewhat distant relatives."

Three weeks earlier, his mother had called me.  Surprised that she was calling out of the blue, my first thought was that someone had died.  (Tfu, tfu, tfu...)  Thankfully, that wasn't the case.  Instead, she told me that Ed had been diagnosed with breast cancer and that his doctor wanted to see my BRCA test results.  Of course I faxed them the very next morning.

I also called Ed to check in with him.  Although we didn't see each other often when we were growing up--an occasional simcha, funeral or shiva call was about it--we talked for a while that day.  A  few more calls and emails followed as he compiled his family history (a piece of which we share) and prepared to meet with a genetic counselor.

Fortunately, he's now cured and, best of all, he's negative for a BRCA mutation, which is great news for him and even better news for his two college-age daughters.

We had a great time on Wednesday night, not just comparing notes about surgical drains and itchy incisions, but also about our jobs, our families and what we've been up to since my grandmother's funeral more than 21 years ago.

I'm hopeful that Ed and I will see each other again, that his wife Cara will join us next time, and that from the breast cancer lemons in our lives, we'll make some sweet, pink lemonade.
Posted by JanetheWriter at 6:13 PM 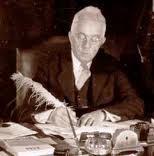 When I was growing up, Thanksgiving dinner didn’t officially begin until my mother had read some prayer of thanksgiving, whether from the pages of a siddur or clipped from the newspaper earlier in the week.

Sadly, that tradition has fallen by the wayside in recent years.  Tomorrow, I intend to resurrect it, although it is somewhat likely that my plan will meet with objections.  Should I give in to them and not read the piece I’ve selected, I’m sharing it here in the hopes that it might get a well deserved reading at someone else’s holiday table.

I’ve chosen the now somewhat famous 1936 Thanksgiving proclamation of Connecticut Governor Wilbur L. Cross, who was a Shakespearean scholar and an esteemed professor of English at Yale.  His eloquence catches the ear and, seven decades after he penned it, his message remains timeless:

Time out of mind at this turn of the seasons when the hardy oak leaves rustle in the wind and the frost gives a tang to the air and the dusk falls early and the friendly evenings lengthen under the heel of Orion, it has seemed good to our people to join together in praising the Creator and Preserver, who has brought us by a way that we did not know to the end of another year. In observance of this custom, I appoint Thursday, the twenty-sixth of November, as a day of Public Thanksgiving for the blessings that have been our common lot and have placed our beloved State with the favored regions of earth -- for all the creature comforts: the yield of the soil that has fed us and the richer yield from labor of every kind that has sustained our lives -- and for all those things, as dear as breath to the body, that quicken man's faith in his manhood, that nourish and strengthen his spirit to do the great work still before him: for the brotherly word and act; for honor held above price; for steadfast courage and zeal in the long, long search after truth; for liberty and for justice freely granted by each to his fellow and so as freely enjoyed; and for the crowning glory and mercy of peace upon our land; -- that we may humbly take heart of these blessings as we gather once again with solemn and festive rites to keep our Harvest Home.

May each of us appreciate the blessings that are ours, savor the company of family and friends, and not overdo it with the mashed potatoes.