Thanks to FORCE, None of Us Walks Alone

Tonight on the way home from work, I stopped at the grocery store to pick up a yahrzeit candle.  Although I’m generally not superstitious, I don’t like to keep them in the house and so I buy them one-at-a-time, only as needed.  I’ll light this one tomorrow night, marking the beginning of my mother’s third yahrzeit.

As regular readers of this blog know, my mourning has been complicated by the fact that just a few months after my mom’s death from exceedingly virulent triple negative metastatic breast cancer, we learned that I carry a BRCA gene mutation (inherited from her, we surmised) that significantly increased my lifetime risk of both breast and ovarian cancer.  This same mutation (unbeknownst to us at the time) was a substantial factor in the rapid course of my mother’s disease.

Looking back, sometimes the time feels like three seconds and other times like three millennia.  In addition to living without her for the last three years, I’ve spent nearly as much time living with and learning about the BRCA mutation I carry.  Thankfully, I haven’t had to walk this path alone.

In addition to the outpouring of love and support I’ve received from all of you—my family, friends, and colleagues, both in real life and virtually—I am especially and deeply grateful to my sisters in the FORCE community. As the organization's full name, Facing Our Risk of Cancer Empowered, suggests, these women—each of whom comes from a family that struggles with hereditary cancer syndrome that all too often leaves gaping holes where mothers, grandmothers, aunts, cousins, and sisters used to be—willingly and lovingly stepped up, taught me what they knew, answered my questions, shared their experiences, and saw me through a complete hysterectomy in 2010, and, in 2011, a prophylactic bilateral mastectomy with autologous reconstruction that was complex, multi-phased, and not without complications—some of which continue to this day.

Initially, as I grappled with an overload of medical information, an abundance of emotional stumbling blocks, and ongoing mourning, I was surrounded by generous and unyielding support from women who had been empowered to face their own BRCA challenges head-on and, despite lingering physical and emotional scars, were moving forward in their lives, even as they were passing along to me what others previously had given to them.

Now it’s my turn.  Last December, I was invited to join the ranks of FORCE’s volunteer Outreach Coordinators, a role that I, like my predecessors, have taken on willingly and lovingly in the hopes that I, too, can step up to help other BRCA-positive women as they come to terms with their genetic mutations and decide upon which positive, life-affirming steps are right for them.

Because FORCE is a grassroots, not-for-profit organization on a shoestring budget, it, of course, faces a constant need for funding.  As I mark my mother’s yahrzeit tomorrow night, I am hopeful that you might consider a contribution to this incredible group that’s been there for me and so that I can be there for others.  Your support will help ensure that none of us in the hereditary breast and ovarian cancer community ever will have to walk this bumpy road alone.

Thank you for the innumerable ways you have supported me on this unanticipated journey.  I am grateful to each of you.  xoxo.
Posted by JanetheWriter at 11:28 PM

Who Wants to Marry a Jew, Anyway? 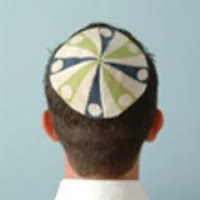 The title of a recent JTA article asks these two questions:

From my perspective, the answer to the second question seems to be much simpler:  I want to marry a Jew.  (OK, having been down the marriage path once, I’m not necessarily looking to go down it again, but if there’s going to be a significant other in my life, I’d like him to be Jewish.)

At 50, my desire has nothing to do with raising Jewish kids, although if he’s got a few, that’s fine with me.  Rather, it’s about finding a companion who, like me, not only sees the world through a liberal Jewish lens, but understands, appreciates and enjoys the view.

In my mind’s eye, he’ll chuckle when I tell him about the time I Googled chevre to confirm the spelling and was surprised to get a list of results about “goat cheese.”

When we discuss the movie 42, he’ll understand my reference to Nachshon ben Aminadav and why a comparison with Jackie Robinson seems apt.

The same goes for Deborah Feldman’s next book-signing.  Not only will he go with me, he’ll borrow my newly signed copy of Unorthodox to read on the train.

At some point, perhaps we’ll decide to host a Shabbat dinner together, each inviting a few of our own friends.  How nice it might be for me to light the candles, for him to recite the Kiddush and for one of our guests to do the motzi.

His company from time to time at minyan and Torah study would be terrific, too, and on the first Sunday in June, brunch could be followed by a march in the Israel Day parade.  In the fall, perhaps we’ll host a Yom Kippur break-the-fast, build a sukkah or sign up together for a Mitzvah Day project.

On good days, I’m totally optimistic that he’s out there, convinced that we just haven’t bumped into each other yet. Other times, I’m absolutely sure he doesn’t exist at all and that I’m destined to be alone for the rest of my days.

I value family, friends, ideas, integrity, intellectual curiosity, honesty and other things money can’t buy. At this point in my life, I am seasoned enough to have made some mistakes, wise enough to have learned from them, and realistic enough to know that perfection exists only in the movies. I’m certainly not perfect and I don’t expect that you will be either, but if we’re lucky, maybe, just maybe, we’ll be perfect enough for each other (flaws and all) and can enjoy good times and good company as part of a friendship that evolves into a meaningful long-term relationship.  If any of this description sounds good to you and you’re a like-minded Jewish guy, 45-60, actively engaged in Jewish life, I look forward to hearing from you.

What Angelina’s Op-Ed Didn’t Tell You

Kudos to Angelina Jolie for revealing her BRCA status to the world and for undergoing a prophylactic bilateral mastectomy that may well have saved her life. With that one op-ed, she single-handedly did more to promote awareness about BRCA gene mutations than all her BRCA buddies—myself included—could collectively do in a lifetime.


I’m not quite so appreciative, however, of the media frenzy that has surrounded Jolie’s announcement. Despite seemingly endless coverage (she is, after all, Angelina Jolie), the dearth of information about the nuances of these mutations and the associated cancer risks is exceedingly disconcerting--especially to those of us who have based our own healthcare and surgical decisions on these very nuances.


With that in mind, I offer you these BRCA basics:
As Jolie rightly points out, women have options when it comes to managing their BRCA risks. Like her, I was empowered to make risk management choices that were appropriate for me, but not before I had fully educated myself about my own BRCA status and the specific choices available to me. Also like Jolie, I am exceedingly satisfied with my decisions and the fact that the threat of neither breast nor ovarian cancer still hangs over me. Nonetheless, even now, nearly two years after my mastectomy, physical and emotional scars remain. And, although they fade a little bit each day, I’m not sure they’ll ever disappear completely.

For more information about hereditary breast and ovarian cancer, contact Facing Our Risk of Cancer Empowered (FORCE), a national non-profit organization solely devoted to providing resources and support to the hereditary cancer community.
Posted by JanetheWriter at 6:14 PM

For a people with just one God, we Jews sure do a lot of counting.

Three patriarchs, four matriarchs, six days of creation, eight nights of Hanukkah, 12 tribes, 40 years in the desert, 70 years in a life--80 if we’re really robust.  You get the picture…

In less than 10 days, we’ll reach Day #49 in the counting we’ve been doing since the second night of Passover.  Known as “counting the omer,” (an omer was a measure of barley used in ancient times for sacrificial purposes) we Jews literally count each and every day for seven consecutive weeks--from the first day of Passover all the way through to Shavuot, the pilgrimage festival that commemorates the giving and receiving of Torah atop Mt. Sinai.

On May 14, which is erev Shavuot, we will have finished counting the omer and (some—and hopefully many—of us) will begin “tweeting #Torah.”  Begun by Reconstructionist Rabbi Shai Gluskin in 2009, tweeting #Torah was designed to bring Torah to as many people as possible with a secondary goal to see #Torah trend in the top 10 on Twitter during the day.

Using hootsuite, tweetdeck or other social media tools, it’s easy to schedule tweets for the overnight hours—especially if you start now, lining up a few each day—and, later, to watch the flurry of #Torah tweets and retweets scroll by on the screen.

Here are a few of the #Torah tweets I’ve contributed to this effort in past years:

So many Jewish books open on my desk in prep for Tweet #Torah to the Top that I look like a real yeshiva bucher.

Behold, how wonderful it is for people to dwell together in unity. #Torah

Blessed are you Eternal our God, Sovereign of the universe, who has made me a Jew. #Torah

Thus the Eternal blessed the seventh day and called it holy. #Torah

Never again did there arise in Israel a prophet like Moses--whom the Lord singled out, face to face. #Torah

I’m certainly no Pollyanna, but Tweet #Torah is fun, easy, inclusive, and, most of all, does, indeed, bring people to #Torah and #Torah to people.

I hope you’ll join us in this year’s effort.  Although we can't count on it, wouldn't it be great if #Torah was a top 10 trend?!
Posted by JanetheWriter at 11:03 PM