Nearly two weeks ago, somewhat tongue in cheek (but with no malicious intent), I posted this photo that I’d taken during the hottest part of the day, when the heat index in New York City hovered around 110 degrees: 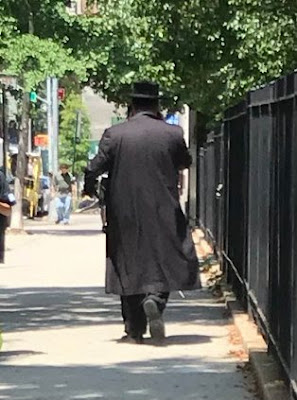 
I think God would have forgiven this man if he'd decided to take off his jacket today.

Update: Actually, I think he just should have taken off his jacket. It's not God who commands him to dress as though he's still living in 19th century Poland. Get with the weather, dude.


A flurry of likes, loves, and laughs followed the post, along with comments – some online and others by text.

By text, one friend asked: “Would say the same thing about a Muslim woman in full garb?”

I responded: “I’m not sure. I don’t know enough about the ‘why’ of Muslim dress.”

To which my friend said, “This feels to me a bit like MYOB.”

Part of the reason I don’t know much about the "why" of Muslim dress is because I’m not Muslim. I am, however, Jewish and this guy is one of “my people.”

A proponent of talking openly and honestly about what we see, my sister noted, “The ‘why’ of Muslim dress is modesty, which is not the case for this man.”

So why do Hasidic men dress the way they do?


Hasidic Judaism was founded in Eastern Europe, primarily the Poland and Ukraine regions, in the late 18th century. The traditional clothing stems primarily from Polish nobility standards of dress during this time. Contrary to popular assumption, Hasidic garb comes more from historical context rather than specific religious texts like the Torah.


The Torah says little about clothing, either descriptively or prescriptively. Without explanation, it prohibits blending wool and linen in a garment (such garments are known as shatnez), in the same verse forbidding “mixing” different seeds and species of cattle (Leviticus 19:19). It forbids men from wearing women’s clothes and vice versa (Deuteronomy 22:5), without specifying the characteristics of either. It also requires Jews to put fringes on the corners of a four-pointed garment (Numbers 15:37-41), both as a way of identifying the Jew and reminding the Jew to observe the mitzvot commandments].

According to this Aish.com video, there are four reasons religious Jews dress the way they do: 1. It effects the way other people see them; 2. It effects how they perceive themselves; 3. It identifies them as members of a specific group; and 4. It expresses their honor and dignity as humans, distinct from animals.

These explanations are all well and good, but none of them expressly prohibits the man from removing his jacket if he’s bothered by excessive heat and humidity – a likely scenario on the day in question.

Perhaps it’s not for me to suggest that he do so – and, of course, I meant no offense in my observations – but, in these difficult times, it most certainly is my business to observe and reflect upon what I see around me.
Posted by JanetheWriter at 8:09 PM