I Think Everyone Read More Than I Did in 2019 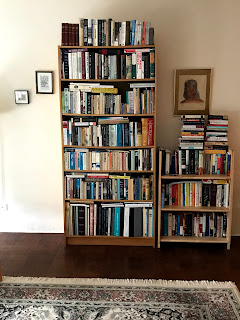 In 2019, I aimed to read a total of 12 books – a modest goal, I thought, after reading seven in 2018 and a mere four in 2017. Although I didn’t hit that target, I enjoyed the books I read and, as difficult as it was, actually stopped reading the ones that weren’t as engaging.

The first one I put down unfinished was “Sapiens: A Brief History of Humankind,” by Yuval Noah Harari. Despite its best-seller status, after 115 pages, I’d had enough and moved on to something that better held my attention. “ Morgan: American Financier,” by Jean Strouse, also didn’t do it for me. Although I was interested in the historical facets of the man – his travels, family, and home, located just a few blocks from my own apartment – the financial rigmarole of stocks, bonds, banking, and railroads was more than I could handle after plodding through more than 200 pages.

Having put those two tomes aside, these are the four books I read from cover to cover in 2019.

1. When a beloved high school English teacher died suddenly in February, I purchased a copy of Benjamin Dreyer’s “ Dreyer’s English: An Utterly Correct Gide to Clarity and Style,” in his memory and was immediately smitten with the author’s – a copy editor at Random House -- wit, wisdom, and irreverence around grammar and language. By the end of the month, I was quoting from the book often. Here’s one of my favorites: “One does not...use quotation marks for emphasis. That is why God invented italics.”

2. A random find at Labyrinth Books in Princeton, NJ, where we Hermans are frequent visitors, “Rosalind Franklin: The Dark Lady of DNA,” by Brenda Maddox, captivated me on all fronts. Here’s what I wrote on goodreads.com upon finishing the book in May:


Before finding this book by accident, I had little idea about Rosalind Franklin – who she was, what she accomplished, or how she was robbed of the credit she deserved for her work at the time by the very men, fellow scientists, who benefitted most from it and who went on to win the Nobel Prize, thanks, in large part, to her Photo 51.

An entirely different facet of her life intrigued me, too. Her family's Jewish history and a relative's role in British-ruled Palestine, as well as the possibility that she carried a BRCA mutation, which may have contributed to her death from ovarian cancer at age 38, were fascinating aspects of her life -- especially to a fellow BRCA mutation carrier.

I recently found a second book about her, "My Sister Rosalind Franklin: A Family Memoir," written by her younger sister, Jenifer Glynn, and I look forward to reading that one as well.

3. Turning to something lighter during the fall, I got totally wrapped up in Claire Lombardo’s debut novel, “The Most Fun We Ever Had,” which my sister, a voracious reader, recommended to me. Over the course of only 11 days, I read the entire 532 page book that tells a decades-long tale of the Sorenson family – Marilyn, David, and their four daughters – from the point of view of nearly all the characters. “Real people, real life, and a good read about one family's ups and downs that will take you away from whatever nonsense you're dealing with in your own life,” is how I described it after finishing the book in October.

4. My final book of 2019 also came from a recommendation from my sister, who lent me her inscribed-by-the-author copy after she’d met him at an arts and medicine event at Memorial Sloan Kettering Cancer Center: “The End of Your Life Book Club,” by Will Schwalbe. This one, too, I read in short order, finishing it just a few days ago, after which I wrote this “review” on goodreads.com:


Although the book initially seemed a bit slow to me, I grew to love the author and his mother through the course of reading it. From the start, his descriptions of the MSKCC waiting rooms – including the coffee and graham crackers – were oh-so familiar to me, and I came to realize that I'd met his mom’s oncologist, Dr. Eileen O'Reilly, M.D., when she spoke about pancreatic cancer at a NYC FORCE meeting several years ago. For these reasons, as well as having lost my own mom to cancer shortly after the author lost his, I feel a connection to him. Of course, all the "book talk" was wonderful, and I've added several volumes from the book's appendix to my own to-read list.

Happy new year and happy reading, my friends.
Posted by JanetheWriter at 1:10 PM