The Minutes and the Hours and the Days Pass By…

Today strikes me as a real “circle of life” day.

I got up early and was out the door by 8 a.m. to head to the West Village for Ian’s graduation from P.S. 41.  It’s hard to believe that the little boy with the baby face who started kindergarten there six years ago is moving on to middle school.  I know I’m biased (as you would be, too), but he’s tall and good-looking, a great baseball player and teammate, as well as a wonderful mimic, but still a sweet, kind and polite kid.  He loves Legos, drawing, riding his scooter, Sponge Bob, and hanging out with his friends (and "his Monica").  I think that’s how you turn out when everyone loves you.

The morning’s festivities were more like a wonderful assembly than a graduation, and I thought it was nice that the kids didn’t wear those cheesy polyester gowns with the matching mortarboards because you could really see their personalities in the clothes they wore (or that their mothers made them wear!).  Ian wore a “nice shirt”—a plaid button down, with khaki shorts and sneakers, an outfit that was similar to what many of his friends were wearing.  Some kids wore suits and ties, others jeans, but I especially loved the sweet dresses—adorned with flowers and lace—that many of the girls wore. 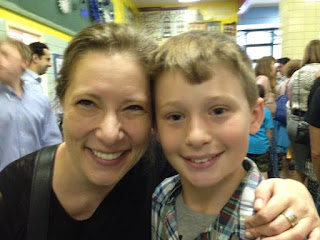 You would have loved the whole thing, sheping nachas and bursting your buttons from beginning to end.  As the kids processed in by class, America the Beautiful played in the background.  We weren’t really listening though, just looking for Ian and waving wildly when we saw him.  Once they were all seated on the stage facing us, we rose for the Pledge of Allegiance and then listened as the kids sang the P.S. 41 Song.  Then came a few speakers:  the principal, Manhattan Borough President Scott Stringer, the head honchos of the PTA, and the assistant principal, who presented an award to a student whose unknown theater arts talents were uncovered at P.S. 41. Then the kids sang Imagine by John Lennon and, with all those formalities out of the way, the teachers from each class presented the certificates of promotion to each student as his or her name was called.  When Ian's name was called, I leaned over to Monica and said, "Bubbe would be so proud."  Once the last graduate—Salenne Wolfe—had picked up her certificate, there was lots of whooping it up and a few tears, mostly from Monica and Amy.  The ceremony ended with the entire class singing Shy, from Once Upon a Mattress, which was the  fifth-grade production, and serves as a rite of passage for the kids as much as, if not more than, this morning’s graduation.  After the graduates recessed to the cafeteria, we all followed for hugs and photos. 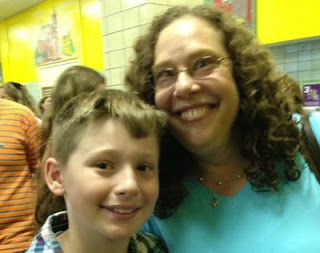 Meanwhile, Daddy also got up early because sadly, he and Aunt Bea went to Ray’s funeral this morning.  He’d been in hospice for a few weeks with failing kidneys, and died yesterday at 83.  You know that had I been able, I would have gone with Daddy, but I believe that had the two processions intersected, the funeral would have yielded to the graduates, and I thought it best to be with Amy, Ian and Monica (and John, Carla, Nolan (Ian's little brother), and Carla's mother) on this milestone day.  However, I will do my best to make a shiva call later this week.

And so it goes, The Mums.  Ian’s moving on to middle school and Ray’s joining you wherever you are.  Although I’m not sure you’ll see him in the yeshiva where I'm sure you're spending lots of time, I do hope you’ll connect with Ray and be able to enjoy some of his gastronomic delights. 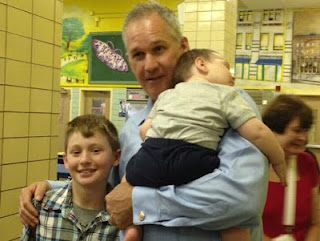 As Rabbis Ken Chasen and Josh Zweiback, the singing duo known as Mah Tovu, tell us in the chorus of their song “Round and Round:”

Indeed it does…and I miss you more with each spin of the earth on its axis and with each of its trips around the sun.

Torah on the Farm

“Must go pack...my least favorite chore. The trade-off, however, is a weekend trip to Baltimore with teens from Temple Emanu-El - Edison, New Jersey and their rabbi, David Z. Vaisberg.”

One of my Torah study buddies commented:  “Have fun.”

“I'm sure it will be fun,” I said, “but I will miss the Temple Shaaray Tefila minyan and Torah study. See you next week!”

And, of course, I did miss my regular Shabbat study buddies and our “city routine.”  However, the Sunday morning our group of five recent Confirmands and two adults spent around the farm at the Pearlstone Center overflowed with hand-on Torah study.


Under the guidance of Laura Menyuk, Pearlstone’s Education Programs Coordinator, we began by getting the lay of the land as it relates to water:  rain, run-off and filtration, before visiting the steamy greenhouse, the compost pile (pew wee!) and the outdoor fields of strawberries and still-green wheat.  The wheat stalks, once they’re fully grown and harvested, produce enough grain for about eight challot.  Finding and plucking a few of the ripe red strawberries, we recited the blessing for fruits that grow in the soil:  Baruch atah Adonai elohaynu melech ha'olam boray pri ha-adamah. Yummy…and absolutely nothing like those grocery store berries. 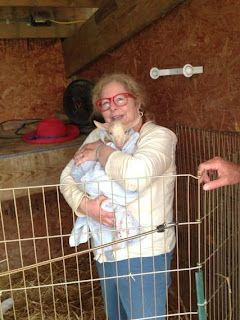 Moving on to the goats, our plan included milking and cheese-making.  As is often the case, though, der mentsh trakht un Got lakht (man plans and God laughs).  As we approached the goat pens, we learned that Hannah, one of the mama goats, had just given birth to a long-awaited baby…and that perhaps another was on the way.  We crowded around to watch Mimi, the goat doula, and Jane, a volunteer, do their thing.  Before too long, another baby did emerge, but this one wasn’t breathing.  Acting on instinct, Jane picked him up to be sure he was alive and, as she told me later, “Voila, he started to breathe.”  A truly holy moment in the circle of life…and a shehecheyanu occasion, indeed!

Reluctant to continue on, we were drawn to the older baby goats nonetheless and spent a bit of time getting to know them.  In this case, pictures tell a better story than words: 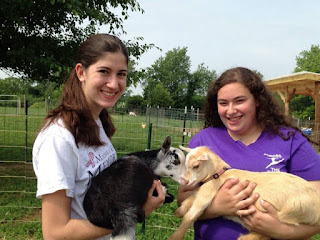 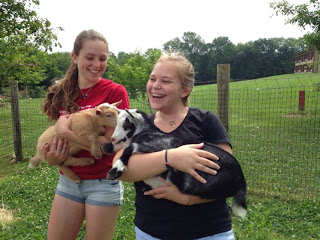 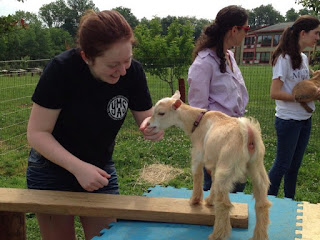 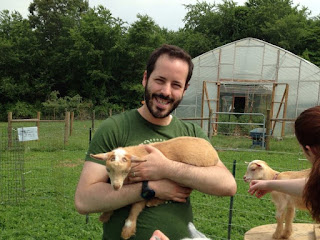 Our farm adventure continued back in the dining hall where we helped make a simple farmer’s cheese by pouring distilled white vinegar into simmering milk at just the right temperature.  Health regulations prohibit Pearlstone from using the unpasteurized goat’s milk for this activity so a gallon of whole milk from the grocery store had to suffice.  A few minutes later, we were enjoying warm homemade cheese curds on crackers.

While we waited for the milk and vinegar to curdle into cheese, Laura reminded us that many of our Biblical forebearers, including Moses, were shepherds, and she told us this story from the Mishnah:

Out grazing his flock of goats, Moses noticed a small, young goat that had wandered away. Afraid that it would get lost and die in the wildness he followed after it, only to find it drinking at a spring.  When the goat had had its fill, Moses picked it up and carried it on his shoulders back to the flock.  Only after God had witnessed Moses’ act of compassion toward the smallest and weakest of creatures did God select him to be the shepherd of the Israelites.

Our last stop on the farm tour was at the pile of hay and bupkis (goat poop) that accumulates when the goats’ pens are cleaned out.  The good news is that it’s the perfect ingredient for composting, so as these photos show, we shoveled and shleped it down to the compost pile where it will do its part in the circle of life: 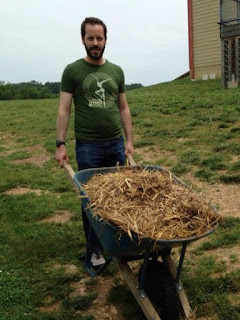 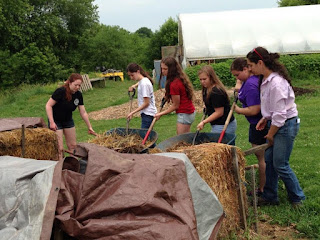 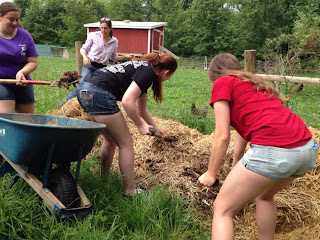 Our farm adventure ended, as it began, with a blessing. This one was impromptu, with each of us focusing on an aspect of what we’d learned and for which we are thankful.

Mine went something like this: Baruch atah Adonai elohaynu melech ha'olam for so many reminders and new knowledge about the interconnectedness of our world and our responsibility to cherish, preserve and protect it.

Amen.
Posted by JanetheWriter at 1:03 PM