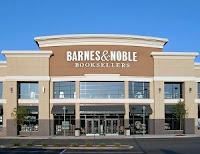 For the last four years, my father and I have taken a break from Yom Kippur davening by browsing together in the Barnes and Noble bookstore near my parents’ synagogue.  This year was no different, but like everything else we’ve done in the last few months, it was oh-so different.  You can read about our experience here.  Our previous years’ browsing adventures are detailed here and here.

Thankfully, that long, solemn day is now behind us and we’re on to Sukkot.  Chag sameach!
Posted by JanetheWriter at 5:46 PM 1 comment:

A Big Pink Thank You! 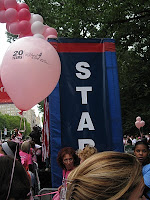 I didn’t even think about it.  Back in June, having barely finished sitting shiva for my mother, I signed up.  It just seemed like the right thing to do. 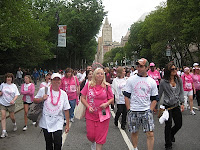 And almost immediately, the donations started.  In just a few days time I’d hit the $250 mark.  A few days later, $300.  And so it went throughout the summer.  This past Friday, I topped $2500.  The credit, though, goes to you, my family and friends, some of whom I’ve known a lifetime, others I’ve never actually met.  No matter, though; each and every one of you has graciously and generously supported a cause that has importance and meaning to me and my family, and I am extremely grateful. 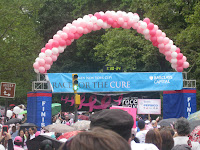 As important as the financial support, however, is the emotional support you showered upon me in the days leading up to the Race…and most especially today.  Countless phone calls, texts, emails, and Facebook messages sent me on my way and assured me that even as I strode alone among the throngs on Central Park West at the start of the Race and tearily watched the parade of survivors at the end, I wasn’t really alone.  Like the two angels who hang with us on Shabbat, so, too, were each of you—and my mom—striding along right beside me.

Thanks so much…it was good to have you along for the ride!  (For more photos from the Race, click here.)
Posted by JanetheWriter at 1:35 AM 1 comment:

Email ThisBlogThis!Share to TwitterShare to FacebookShare to Pinterest
Labels: breast cancer, Race for the Cure

Letter to My Double Helix

You’re probably wondering why I’m writing to you now, after 30-some years.  Yes, that’s how long it’s been since I sat in Miss Ganim’s 10th grade biology class studying your components—adenine, thymine, guanine, and cytosine—your “founders,” Watson and Crick, and the guy on whose shoulders they stood, Gregor Mendel.  Remember him?  He’s that Austrian monk who tinkered with those garden peas, eventually earning himself the title of “Father of Modern Genetics.”

Indeed, thanks to the monk’s toying with those plants, it’s clear just how I ended up with brown eyes, curly auburn-ish hair, and a gait that from behind (my mother always said) is exactly the same as my father’s.  Factor in some additional family history, the work of the human genome project (completed in 2003), and the availability of genetic testing, and it’s relatively clear (relatively being the operative word here) how I also ended up with a BRCA2 gene mutation--6174delT to be precise—that increases my lifetime risk of breast and ovarian cancer.  Needless to say, Double Helix, I’ve been thinking about you quite a bit in recent days.

I’ve also been doing and not doing lots of other things.  Here’s a short list:
Having said that, I’m off to the Baruch bookstore to get this semester’s books.  With any luck, I'll have enough of a head to pay attention and read them...