To March or Not to March?

In today’s mail I received a four-page, single-spaced letter from Baruch College that provides all the details for the 48th commencement exercises, which are scheduled for Thursday, May 30.  Even though that's the date of your third yahrzeit, it’s not the date that’s an issue for me.  It’s the location:  Citi Field, home of the New York Mets.  You likely knew it in its previous incarnation, Shea Stadium—and as a loyal daughter of the House that RuthBuilt, I’m equally sure that you’d never willingly set foot in it.

Even if I do everything required—order and pay for a cap and gown, secure guest tickets, pick up the academic regalia at the appointed time, schlep to Citi Field, arrange for Daddy to schlep to Citi Field (Amy will be out-of-town that day), and march in the processional (no, unlike the last time I graduated, Meryl Streep is not leading this one)—I’m not at all sure I will then want to sit (or subject Daddy to sitting) in a folding chair in the sun for three hours amidst more than 2,000 graduates and 10,000 guests.  Just the thought of trying to find him afterwards makes me anxious.

On the other hand, I worked hard for this degree, it took me a long time to finish it, and there’s a certain unbridled joy that likely will come from participating in all that pomp and circumstance (even if Baruch is the school I loved to hate).  Will I be sorry if I’m not there to enjoy it?  Will I regret squandering the opportunity to move my tassel from the right to the left when the degree is officially conferred?  Will I lament not having photos of the occasion?  Perhaps…

Regardless of what I decide to do, I know that you--as you are everyday--will be there with me...even if we find ourselves at Citi Field.

Tonight, while many of my friends were out shpieling and noshing hamantaschen, I attempted to tally the results of this week's wholly unofficial fish taco survey.

And the survey says…it’s complicated.

A total of 15 people commented on the post in one way or another—some on Facebook and two (thanks, Donnie and Debbi) by leaving comments directly on this blog.

In the “Yea” camp are six readers who liked the post.  Whether that affirmation extends to fish tacos themselves isn’t entirely clear.  Three others unequivocally affirmed their love of fish tacos:

"Making them for dinner tonight!"

In the “Nay” camp are these who say feh—literally--to fish tacos:

"Never had them, but can't say as they sound very appealing...."

And then there are those who had to qualify their answers in some way—complicating the results:

"Not a fan, although there was a place in LA that had really good mahi mahi burritos!"

"It's complicated. You can find some good ones. I eat way too much fish now to be looking for fish tacos."

"It goes without saying they have to be good fish tacos to be good. But I guess I am just a Cali boy at heart."

"Fish tacos can be yummy, but I still prefer my fish as sushi.".

From these results, I can reasonably conclude that not only are my readers particular about the foods they’ll eat, but also that fish tacos aren’t high on their lists of “must have” culinary delights.

Good to know, my friends.  Good to know.
Posted by JanetheWriter at 10:54 PM

Over the weekend, my friend, Robin, posted this status on Facebook:

One person “liked” the post, which doesn’t necessarily mean, however, that he “likes” fish tacos.

And, in fact, the general consensus based on the conversation that ensued was anything but “like” when it comes to fish tacos.

“I’ve never understood the appeal of fish tacos,” I commented to my friend.  “Can we talk about this next week?” I asked.

“I will be happy to opine about fish tacos and any other subject of your choice,” she replied, adding, “Oh, how I love to opine.”

“You’re on,” I quipped back, before adding this:  “In the meantime, enjoy the fish tacos.  Blech!”

A while later, Robin’s friend Richard chimed in with this:  “I always thought fish tacos sounded nasty until I tried one. It was good. But, I won't go out of my way for another one! Your friend Jane should at least try one. (Or maybe she already has?!)”

No, Richard, I haven’t yet tried one.  They just sound oh-so nasty to me…

As an afterthought, she added this:  “Will stick with cream cheese and lox.  Yes, much better.”

So, what say ye, my friends?

Leave a comment and let me know.  Upon reaching critical mass, the results of JanetheWriter's official unofficial fish taco poll will be published in a subsequent post. 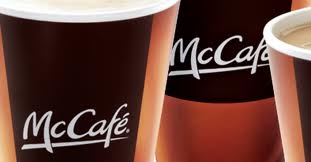 If you’ve spent even a little bit of time with me — IRL or virtually — you likely know that I don’t know Russell Crowe from Sean Penn from Tom Cruise.  I can’t distinguish NataliePortman from Lindsay Lohan, Keira Knightly from Jennifer Aniston.  I do, however, know Helen Hunt, Jill Eikenberry, Julianna Margulies and Christine Lahti (not to be confused with latte), which should give you a very big clue about when I last saw “must see” TV.  But I digress…

Similarly, I don’t know a cappuccino from a café au lait, a latte from an espresso, or an Americano from a French roast.  So I was somewhat interested to read this article in today’s New York Times.  Sadly, though, it taught me little and I’m still most comfortable with one of these options on my daily trek to work:

At the McDonald’s at 39th and Second, I’m good with a “large coffee with milk,” and even better with the $1.09 price tag that’s part of an ongoing promotion that offers any size coffee for $1.

If I opt to walk up Third Avenue, I can satisfy my caffeine craving with a medium Dunkin’ with milk (sometimes with coconut syrup) from the Dunkin’ Donuts between 37th and 38th.  This fix sets me back $2.17.

On the rare occasion that I find myself in a Starbucks (there’s one on 32nd and Second and another one on 41st and Third, as well as one at 81st and Second, a short two blocks from Temple Shaaray Tefila, where I’ve been known to pass the time before an adult education or worship committee meeting), the only thing that rolls easily off my tongue is this:  “A tall blond roast in a grande cup,” which leaves room for milk.  Of course, once I add enough milk to suit my taste, the coffee’s cold…  Generally, this concoction can be had for $2.01, although in some stores it goes for $2.45.  Lately, though, I’ve been using a gift card, a lovely treat given to me for my birthday.

When next my travels take me to Chicago, I’ll make sure to stop in at Caffé Streets, where according to the article in the paper, I’ll fit right in with others in my demographic by ordering “Regular Coffee!!!,” which the proprietors describe as “Drip coffee, as ordered by flustered middle-aged people overwhelmed by a myriad of options and frou-frou drinks.  (Asking what size often results in a complete meltdown.)”

Whatever you’re drinking these days, enjoy it and keep warm!
Posted by JanetheWriter at 1:16 PM