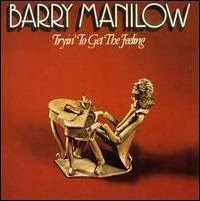 I admit it: I’m a Barry Manilow fan. Yup, ever since high school when Donna Joselson first introduced me to Tryin’ to Get the Feeling, the album with the sculpted piano player on the red cover, I’ve been a fan of this 70s crooner who just keeps on writing the songs. This One’s for You and Greatest Hits soon joined the vinyl disks that went around and around and around on the little phonograph in my room.

A year or so later, my parents took my sister and me to our first- ever concert -- Barry Manilow at the Garden State Arts Center, now the PNC Bank Arts Center. We had lawn seats, which is really a misnomer since there were no seats involved. Instead, we spread a blanket on the grass lawn behind the amphitheater – and it was BYOB (bring your own blanket). The folks a few feet away brought more than a blanket, but I, of course, had no idea about that sweet smell that wafted over to where we were sprawled out enjoying our pre-concert picnic. (Today, with the possible exception of my sister, none of us could any sooner get down on the ground for a picnic than we could get up from the ground at the end of the concert. But that was a long time ago…)

Even now (no pun intended!), all these years later, I sometimes find myself singing along (yes, I freely admit this) to Mandy, Weekend in New England, Can’t Smile Without You and I Write the Songs when they pop up in my iTunes player. Needless to say, therefore, I was maddened by an article in today’s New York Times about Colorado Judge Paul Sacco, who regularly sentences noise ordinance violators to one-hour, high volume Barry Manilow listening sessions.

Judge Sacco: sign me up!
Posted by JanetheWriter at 10:34 PM