And She Lived Happily Ever After

This week's Red Writing Hood prompt from The Red Dress Club asked you to spread a little joy.

You were to write a piece where you or your character overcame a challenge and, even if it's just for a moment, has a happy ending. 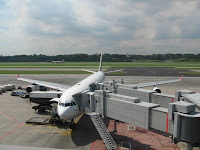 Hoping the tank was on the right, she steered the tin can rental up alongside the pump, found the latch to unlock the cover, climbed out and filled it like a pro -- with neither dirt nor gas staining her hands.   (After all, she’d been born and raised in New Jersey where self-serve gas didn’t exist.  But, after nearly five years in LA and a few before that in New Hampshire, she’d learned a thing or two about pumping gas.  Too bad she hadn't also learned to listen to her gut...until now.) With the tank full, she set out again, following the signs to “Returns,” where she easily guided the car into an empty spot.  After returning the key, she made her way to the terminal, checked her bag--which could have doubled as a steamer trunk--and proceeded to the gate.

This was her second trip down the 405 to LAX this week.  A few days earlier, her neighbor, Carole, had followed her to the port where she’d dropped her car so it could make the trip back east on a car carrier. Carole then ferried her to the airport, where she’d picked up the rental she’d just now dropped off.  In the intervening days, she’d been busy -- packing and shipping to her parents’ house everything that wasn’t headed for storage.  Yesterday, the movers had come, removing the furniture and boxes--only those without a “Do Not Pack” sign affixed to them--headed for the self-storage locker her mother had rented just last weekend.  She’d tied up a few loose ends at the office and said her goodbyes (yes, even to him) before spending her last night in LA at another Carol’s, this one her friend and colleague, who, as luck would have it, lived near the airport.

With plenty of time to spare at the still empty gate, she watched through the huge glass wall as golf cart drivers swerved around each other, delivering wayward bags to jets at other gates.  At the closest one, workers atop a platform crane loaded meals and supplies onto a parked plane. Taking it all in, she was well aware of the absence of the elephant that recently had departed her being.  A newfound lightness filled her to the core.

An older woman, nodding and smiling, sat down next to her.

“Are you traveling for business or pleasure?” the woman inquired.

She hesitated a moment before answering, “Neither....  I’m leaving my husband.”  With the words hanging in the air, she was stunned.  Where were her filters?

“Is this a good thing for you?” the woman asked, unshaken.

“Oh yes,” she said, empowered by what she’d already accomplished and elated by the new freedoms she knew lay ahead.

R
Red Writing Hood is the writing meme of The Red Dress Club.  The finished piece should be no more than 600 words of either fiction or non-fiction.  Thanks for reading...and feel free to offer thoughts, ideas and/or constructive criticism.  I appreciate hearing what you have to say.
Posted by JanetheWriter at 3:49 PM