Because I’ve been so very forthcoming about my ongoing BRCA journey, I need to fill you in on today’s adventure—not only because it’s a milestone on the journey (the last official step in the reconstruction process that started 14 months ago), but also because it happened to coincide with the beginning of Hereditary Breast and Ovarian Cancer (HBOC) week.

A few minutes before 10 a.m. this morning, I checked in on Foursquare at Memorial Sloan-Kettering's Rockefeller Outpatient Pavilion on 53rd Street.  Up on the 10th floor, I checked in again—this time with the receptionist in the Plastic Surgery suite.  About 10 minutes later, I was in one of the exam rooms (at this point, I think I’ve been in all of them), where I met Casey, Dr. Mehrara’s physician’s assistant (PA), who, if she was so inclined, could moonlight as a tattoo artist in the Village.

Initially, had the setting been a bit different, I might have mistakenly believed I was at the Clinique counter in Macy’s, trying to find just the right shade of lipstick.  As she applied each option to my skin, Casey would comment:  "This one is too orange…  I think this one’s too pink.  Let’s see what happens if we add a little brown to this pink one…" 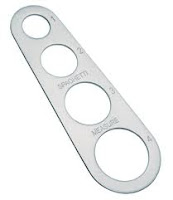 Once she and I agreed on the color, we moved on to pick the size of the areola, using what looked like one of those kitchen gadgets that lets you measure how much spaghetti to cook based on the number of servings you need.  With the tentative measurements and pigments marked on my body, Casey called in “the boss” who OK’d our handiwork.

With that approval in place, she got down to work.  Because there are few if any nerve endings in the abdominal tissue that now masquerades (quite well, I think) as breasts, the actual tattooing didn’t hurt, although I could feel the pressure of the needle.  In one spot, there does appear to be some nerve regeneration going on (this is a good thing), so she applied some topical Lidocaine before taking up the needle again.  Once she was finished, I got a quick look at my newly tattooed (but also very red and bleeding) body parts before she applied antibiotic ointment and covered them with non-stick gauze anchored in place with medical adhesive tape.

Armed with written instructions and all the supplies—non-stick gauze pads, antibiotic ointment, petroleum jelly, adhesive tape—I’ll need to care for my new tattoos for the next week, I was back in the waiting room by noon, ready to make my next appointment, which is now scheduled for January.  Thirteen blocks later, my new tattoos and I were at 633 and I was at my desk, catching up on emails from earlier in the day.

No, definitely not just another day in the office, but rather a personal milestone worth marking in some indelible way.
Posted by JanetheWriter at 10:31 PM