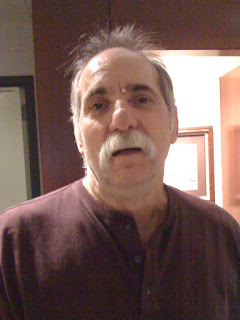 Nearly four years ago, I wrote this post, which was supposed to be the first in an occasional series.  Although it's been much longer than I intended, I'm glad to bring you the next installment about another person in my neighborhood.  This is Jimmy Vignapiano, who works in the mailroom at the Union for Reform Judaism and brings me my snail mail each day.  Our conversations usually go something like this:

Me (rolling my eyes if there's a lot of mail):  Thanks, Jimmy.  Have a good one.

Earlier this week at the URJ Hanukkah party (where longtime employees are honored on their milestone anniversaries), Jimmy and I sat at the same table.  When I got back to my seat after accepting a certificate and gift marking my decade with the Union, Jimmy told me that when he celebrated his fifth anniversary with the URJ, he received a kiddush cup.  After 10 years, he received a chanukiah.  What he told me next made me chuckle:  Today, the kiddush cup hangs on the Vignapianos Christmas tree and the chanukiah sits on the mantle in their home.

Posted by JanetheWriter at 11:56 AM