Keepsakes From a Life 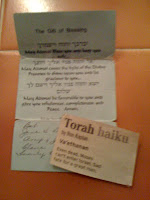 I spent most of this afternoon cleaning out my mother's desk.  Although there was much that could be tossed from the drawers--old buttons, grocery receipts, newspaper clippings, pink ribbons (oh if only she'd known), countless pens advertising Zithromax, Procardia XL and the UAHC Department of Adult Jewish Growth, as well as business cards from clergy and now-defunct stores and start-ups--many items remain neatly tucked away there, keepsakes from her life.

Of course there are photos.  Many of my mom--as an infant, a child, a college student, a young married woman, a new mother, and a new grandmother--filled one folder.  Images of  other relatives--some from decades ago--filled another.  My sister, Ian and I, mostly as babies and in classic school photo poses are well represented, too.

Keeping company with the photos is my parents' wedding invitation and many mazel tov telegrams sent care of the Free Synagogue of Flushing, where they were married just a few years after my mother attended a friend's confirmation there.  Also in that drawer are the announcement of my birth, the program from her college graduation, a similar booklet from one of my father's master degree ceremonies, my mother's Gratz College valedictory remarks from the spring of 2001, a d'var Torah she delivered at a long-ago editorial board meeting of RJ magazine, and the booklet from her 50th high school reunion.  (The senior yearbook photo reproduced in that booklet bears a striking resemblance to this writer.)

An embroidered LWV name tag and one from the NJWHVC of the UAHC made the cut as did her college ID, her first driver's license (issued by the State of Maryland in the 1950s, when my parents lived at historic 105 Council Street in Frederick), and a small yellow disk etched with her name and birth date, which my father identified as a children's ID tag, required during WWII.  The newspaper notice of my parents' marriage, a few notes, cards and clippings from her work as an early childhood educator six decades ago, and a campaign button for Adlai Stevenson, as well as a handwritten letter from the politician remain in her desk as well.

Two items from her wallet so touched my heart they're now tucked into my own wallet.

The first, a light-blue three by five card, folded and refolded, taped and re-taped is printed thusly:

The Gift of Blessing

May Adonai Bless you and keep you
safe...

May Adonai cause the light of the Divine
Presence to shine upon you and be gracious to you...

May Adonai be favorable to you and
give you wholeness, completeness and
Peace.  Amen.

The second, a one-inch by two-inch clipping from a Jewish newspaper (I presume), will surprise no one who ever studied Torah with my mother.  That she saw fit to carry it constantly with her speaks volumes about her love of Torah, Jewish learning, and Moses.

Torah haiku
by Ron Kaplan (Is it this Ron Kaplan?)

And yes, as one of her rabbis suggested to me soon after her death, I believe she's reveling in hakn[ing] Adonai a tshaynik about what a raw deal Adonai dealt to Moses.
Posted by JanetheWriter at 10:10 PM