Ten Things Y'all Can Learn During a Visit to Jackson, Mississippi 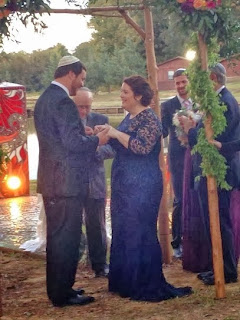 Number 9:  A sentence is not complete unless there's at least one "y'all" in it.

Number 7:  Few things are as important as college football.

Number 5:  Jackson is home to Tougaloo College, an historically black college founded in 1869 to educate freed slaves and their children.  According to the National Science Foundation, it has graduated more students who have completed PhD degrees through the UNCF-Mellon Doctoral Fellowship Program than any other institution in the nation.

Number 4:  Historic Canton, Mississippi, a few miles up the road from Jackson, is home to the beautiful Greek Revival Courthouse featured in A Time to Kill, which was filmed entirely in Canton.

Number 3:  Eudora Welty, a native Jacksonian, lived and wrote in the same house for nearly 80 years.

Number 1:  Nothing beats celebrating the marriage of two terrific friends -- destined to find each other in Utica, Mississippi -- in the place where they met...and gaining a few new "cousins" along the way!

Mazel tov, Anna and Nadav!
Posted by JanetheWriter at 8:07 PM