A Week of Anniversaries: Bitter and Sweet

This past week has been full of anniversaries.

Last Saturday, May 30, marked five years since my mom died.  In 2010, it was the Sunday of Memorial Day weekend.  We had stayed with her late into the evening on Saturday, and one of the last things we read aloud and sang to her in hospice was havdalah.  It was fitting, therefore, that she chose the wee hours of Sunday morning to separate herself from this world and move on to Olam Ha‑Ba.  Exactly three years later, I (finally) graduated from Baruch College's School of Public Affairs with an MPA, an event that ultimately, I was insistent my dad and I attend. 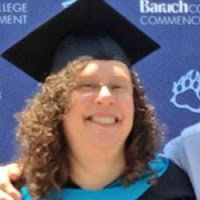 Monday, June 1, was the anniversary of my mother's funeral in her beloved Temple Emanu-El.   Thirty-one years earlier -- on the same day, June 1 -- David Lehrfeld, Michael Gallof, and I were confirmed on the exact same bimah from which she was eulogized. Do the math, therefore, and you'll know that this past Monday was the "double chai" anniversary of our confirmation.

Tuesday marked the 30th anniversary of my college graduation, a day I recently remembered this way on Facebook:

Can it be three decades since that glorious graduation day when Jeanne Walsh, Fred Robustelli, and I offered prayers at the baccalaureate service, Meryl Streep began her commencement remarks by singing "Que Sera, Sera," and I thought a terrible mistake had been made when I was awarded the David Fowler Atkins, Jr. Prize, which at the time was "presented to the student who, in work during the junior or senior year in the department of religious studies, gives promise of future usefulness in service to the Christian community"?

So glad to be coming back to see you for a milestone reunion visit in a few weeks.

Lastly, today is 26 years since the Tiananmen Square uprisings, which happened to coincide with my wedding day, June 4, 1989 (yes, that event -- the wedding, not the uprising -- also took place on the bimah at Temple Emanu-El).  Come December, the years of my marriage and the years since my divorce will reach equilibrium.

Although it won't happen for more than six months, one more anniversary is worth noting. Parashat T'rumah in 5776 will mark the 40th anniversary of my bat mitzvah, which took place on Friday, February 6, 1976, on the bimah of, yes, you guessed it, Temple Emanu-El in Edison. In 2016, Parashat T'rumah will be read on Saturday, February 13. At this point, I don't know exactly how I might mark that milestone occasion, but having never given a d'var on the parashah, I have a few ideas in mind.