Why I Keep Telling My BRCA Story

Recently, I was invited to write about my BRCA journey for Invitae, a genetic information company, as part of a campaign to inform and inspire people to understand the impact of hereditary breast cancer. The hope is that these stories will jump-start a Facebook conversation about hereditary cancer.

Although I tell my BRCA story again and again, it never seems to get old. There are always new people to hear it, and its potential to change the trajectory of just one person’s life makes the telling and the retelling – and all the sharing – worth it.

Once upon a time…

In the mid-1990s, when my maternal aunt was in her late 60s, she was diagnosed with post-menopausal breast cancer that she found herself. A single mastectomy and chemotherapy followed and thankfully, she’s a sprightly octogenarian today.

Grateful, I barely gave it another thought.

A little more than a decade later, my mom, too, was diagnosed with post-menopausal breast cancer that was detected on a mammogram. She was 76 years old. A lumpectomy and 30-some daily radiation treatments followed. (She did, however, opt against adjuvant chemo, claiming that at her age – as she understood the statistics and the treatment’s side effects – she didn’t want to disrupt her quality of life for what she did not perceive as sufficient benefit.) With her treatment complete, she was fine….until she wasn’t. Fifteen months after her initial diagnosis, she experienced excruciating back pain that was quickly attributed to a fractured pelvis – the result of triple-negative metastatic breast cancer.

Seven weeks in the hospital followed – mostly for pain control – during which the disease ravaged my mom’s body in horrific ways. Although her oncologist never talked to us about testing her for the presence of a BRCA mutation, he was quick to discuss how she would regain her strength and then be ready for chemo.

When he finally admitted she wasn’t going to get better, we followed her wishes, spending 11 days together as a family in hospice until she died peacefully and in no pain over Memorial Day weekend in 2010. She was 77 years old.

I work in the Jewish world and from the depth and exhaustion of my grief, I dug up a random memory of a connection between Jews and breast cancer…. 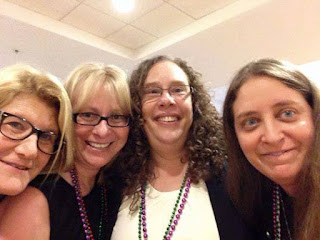 That summer, my sister and I met with a genetic counselor and tested for the three Ashkenazi Jewish founder mutations. Although Amy's test results were negative, mine were positive for the BRCA2 founder mutation – 6174delT. Suddenly, I had lots of new “cousins,” and was part of a club I never even knew existed (The photo is me with some of them -- Lori, Shoshana, and Lara -- at a recent ‪‎FORCE conference).

A hysterectomy and oophorectomy followed within four months, but, unable to wrap my head around a mastectomy, I lined up what seemed like endless medical appointments for breast surveillance, beginning with a baseline MRI. The results, according to my medical oncologist, “were not perfect.” An ultrasound, another MRI, and a needle-guided biopsy all followed in the span of 10 days, the totality of which clearly demonstrated to me that I did not possess the risk tolerance necessary for surveillance.

Three months later, I had a prophylactic bilateral mastectomy with DIEP reconstruction -- a second (posthumous) gift of life from my mom.

A few years later, my octogenarian aunt finally tested (I guess she got tired of my asking her about it!) and, not surprisingly, she’s positive as well. One of her sons is negative; the other has yet to test. (In hindsight, it’s also no surprise that her father died from metastatic prostate cancer in the mid-1980s, a few years before scientific research uncovered the genetic links associated with BRCA mutations.)

Although our family’s story might end there, it doesn’t.

At about the same time my aunt tested, a second cousin on my mom’s side of the family was diagnosed with male breast cancer. To everyone’s surprise and relief (he has two 20-something daughters), he’s BRCA negative. Following a mastectomy, he’s just fine, but talk about irony…

And if that’s not ironic enough, in August of last year, my BRCA negative sister was diagnosed with breast cancer, found on a sonogram that she’s insisted on having (and for which her insurance always refused to pay) since I turned up BRCA positive. She’s come through 16 rounds of chemo and a double mastectomy in lieu of radiation, even as she continues to receive infusions of Herceptin and Perjeta. Thankfully, her illness is quickly fading in our family’s rearview mirror. Whew!

It is here that, God-willing, our family’s BRCA story truly ends, although promoting awareness about these mutations continues to be an important part of my own life. As I have done for the last number of years, I will continue to volunteer for Force: Facing Our Risk of Cancer Empowered, as well as speak and write frequently on this topic, ever hopeful that sharing our family's experience might save another family from the anguish, pain, and loss we suffered because we didn’t know -- until fairly recently -- that we are a BRCA family.

The end.
Posted by JanetheWriter at 10:48 PM