Does Anything Quimper to This Small World Passover Story? 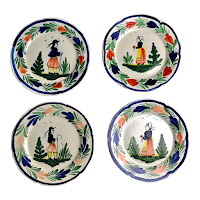 For nearly as long as I can remember, my Aunt Claire has been collecting Quimper French pottery (pronounced CamPear). It’s mostly yellow or white, round or octagonally shaped, and often includes a man or a woman standing in profile, surrounded by a border of dainty, yet measured flourishes of blue, green, or red paint. In addition to plates, bowls, and cups and saucers, my aunt has collected, in the course of nearly 50 years, gravy boats, serving platters, wall hangings, pitchers, vases, and more. Some out-of-the ordinary pieces are painted in shades of green, but still are adorned with the distinctive French country figures. A man on one plate, a woman on another.

When she redecorated her kitchen, sometime in the 1980s, I’m guessing, she made Quimper the centerpiece of the room, choosing wallpaper, fabric for the window curtain, and plain blue everyday dishes—all to complement the yellow pottery. She and I trekked to the Pierre Deux store in New York City to find exactly the right wallpaper and fabric pattern.

Fast forward to this past Thursday evening.

As I scrolled through Facebook, admiring all the seder tables, adorned with laptops to bring friends and family into our quarantined celebrations, this photo caught my eye: 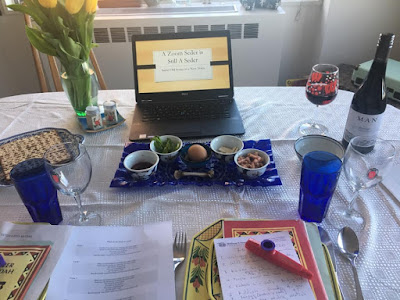 Commenting on the photo, I said, “Chag sameach! And a weird question: Do your yellow dinner plates have figures of men and women on them? Are they Quimper?”

In his reply, the poster of the photo, one-half of a couple I know through a mutual friend (and, more recently, through my synagogue) wrote: “Yes, and I don’t know!”

Me: “What does it say on the back of the plate? My aunt has been a longtime collector of antique pieces of this French pottery, which is pronounced ‘CamPear,’ and she has an incredible collection of it. It seems her collector's eye has rubbed off on me!

Adam: “I looked on the back of the plate and it does say Quimper.”

He then sent me this photo via a direct message and our conversation continued from there: 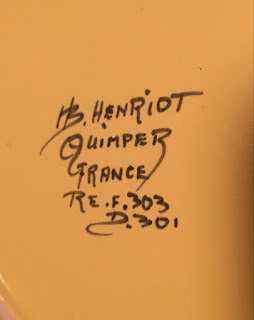 Me: As I suspected! I foresee a blog post coming from this conversation. Stay tuned....and chag sameach!

Adam: Ha ha! Ok. They belonged to Marla’s mom, Donna Newman, and after she passed away they came to Marla.

Me: Are they your Passover dishes or do you use them year-round?

Adam: We use them on special occasions year-round.

It’s now Saturday afternoon, and I’m crafting this post—not only because I love this story of an unexpected connection, but also so I can send it to my Aunt Claire in Florida. She’ll love it, too!

Never again will a Passover come or go that I don’t think of Adam and Marla and the Quimper dishes on their holiday table.

Wishing everyone a ziessen Pesach!
Posted by JanetheWriter at 4:12 PM