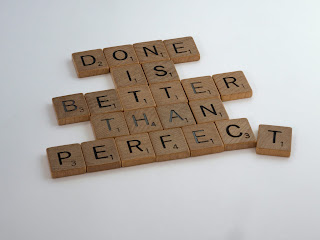 I intended to #BlogElul, I anticipated I would, and, most of all, I want to do it.

Somehow, though, it took me six days into the month to get the ball rolling.

Recently, to help me with my apartment move, I worked with a personal organizer, from whom I learned this adage: Done is better than perfect.

I’ve heard a similar sentiment many times before as this maxim, most commonly attributed to Voltaire: Don't let the perfect be the enemy of the good.

No matter who said it or the exact wording, it’s an idea I want to carry with me into the new year.

Sure, perfect is great—especially for this fusspot who’s hardest on herself—but in 5782, I want to try to ease up, even just a little, and keep in mind that sometimes, done is good enough.

Inspired by Ima on (and off) the Bima , this #BlogElul post is one in a series marking the days of the Hebrew month of Elul, which precede the Jewish High Holidays and traditionally serve as a time of reflection and spiritual preparation for the new year.

Posted by JanetheWriter at 9:34 PM