John Lennon Had It Right 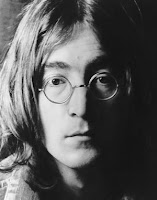 A few months ago, much to my surprise and delight, I met someone in The Schmuck Parade who actually was second-date worthy. And third and fourth…and before I knew it, we were, um, I think the term is “dating.” It’d been so long, I almost forgot what it’s called.

Regular readers of this blog know that when I write about The Schmuck Parade, it’s only in the most general of terms. They’re familiar with Guy #1, Guy #2 and Guy #3, as well as Guys #17, #18, #19 and beyond. Readers also know that I never, ever write about people I’ve actually met in The Parade.

However, if I was going to write about this guy that I’m not going to write about, I would tell you that he seemed to be a refreshing change from the other marchers I've encountered. Unlike so many of them, he appeared to be kind, fun, funny, generous, interesting, thoughtful, sweet and just generally a nice guy. We enjoyed spending time together and in the little more than two months we spent “keeping company,” he’d met a handful of my friends, and we’d done our share of cooking at my place, as well as poking around in the city—Central Park after a snowfall, Chelsea Market, the High Line, and, just two weeks ago, a trek to Flushing, at the end of the 7 train, on the eve of Chinese New Year. There we checked out the neighborhood and enjoyed yummy duck sliders, pork dumplings and spicy beef skewers from vendors at barbecue carts that dot every corner around Main Street and Roosevelt Avenue.

Finally, it was nice to step out of The Parade and stick with one person…quick emails during the day, longer chats by phone at night, city adventures on the weekends. Nice…

Until I got dumped.

And a nebulous one at that.

Shocked? Baffled? Disappointed? Hurt? Yes, yes, yes, and yes. But, in the spirit of making lemonade from lemons, here's a refresher on some of the important lessons that the shock, bafflement, disappointment and hurt also brought my way:

Lesson #1: The Schmuck Parade is most aptly named.

Lesson #2: People are complex creatures and often are not as they appear to be.

Lesson #3: As my sister always says, when it comes to apartments, jobs and men (OK, “affairs of the heart” for you straight guys and lesbians who may be reading this), always go with your gut. It speaks louder and much more clearly than either of its peers: heart or brain.

Lesson #4: Gloria Gaynor is great company and the louder, the better.

Lesson #5: John Lennon was oh-so right, and I’m getting by with a little help from my friends. They’ve been great and I am ever grateful for so much of what they’ve had to say:

Friend #1 on Facebook chat: “He just wasn’t good enough for you. That’s all.”

Friend #2, who has endured her own share of Parade bruises: “I think that this one will have to get the "SCHMUCK of the YEAR" award!!!!!”

Friend #4, who met him: “I am shocked that I could be so wrong about an adult. I feel duped. Thank God he's outta here now, before you wasted time with the SCHMUCK.”

Friend #5 on Facebook: “I wish Facebook had a "You are completely awesome and deserve WAY better" button.”

Friend #6, a cantor, also on Facebook: “I will sing a high note in his general direction! The kind only dogs can hear but that will resonate in his head and give him a migraine!”

Friend #7, one of my study buddies, in an email: “Oy, what a shame that he wasted your time. But, as I always say - we do learn lots about ourselves and about others whenever we have the courage to embark on a relationship and let someone in even a little bit....So, it's up to you to keep doing what you're doing, and hope and have faith that you will meet an equally mature, wonderful, deserving companion.”

Lastly, this from Friend #8, my other study buddy, when we met after class this week: “We’ll get you a tuba and you can get back in The Parade.”

No, not just yet, but thanks to all of you, I am indeed getting by with a little help from my friends.
Posted by JanetheWriter at 6:08 PM