For reasons that are not entirely clear to me, my weekend plans fizzled at the end of last week. Lucky for me, I was able to salvage my Saturday and ended up having a great day filled with food, family, friends and fun. 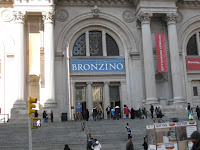 on the agenda was tagging along on a gallery talk my sister was slated to give at the Metropolitan Museum of Art at 11:15 a.m. Only after I met up with my father in the Great Hall of the Met, however, did we learn from her that, unbeknownst even to her until a few minutes earlier, the tour had been canceled. Undaunted, she guided us deftly through the galleries, pointing out the 19th century paintings she’d prepared for the tour, as well as a few others that sparked our interest. We started with Edouard Manet’s Young Lady in 1866 and then compared it with Gustave Courbet’s Woman with a Parrot before moving on to admire the handiwork of Henri Fantin-Latour's floral paintings. A few galleries away, we compared this Madame Cezanne with this one, in which she seems to be saying, “Oy, Paul, another portrait?!…Enough already.” On our way out, we checked out a few Rembrandts (Did you know that Rembrandt was his first name and that his full name was Rembrandt van Rijn? I didn’t…) and Renoirs, including this one, all expertly explained by my sister.

Having absorbed enough culture for one day, we headed downtown on the bus to Koreatown, where we enjoyed lunch at Pho 32 & Shabu, grateful for warm, hearty soup on a cold day. Here's my dad enjoying his: 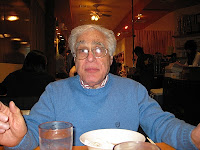 From there, we each headed home—my sister to Union Square, my father to New Jersey via Penn Station and me across town to Kips Bay.

A bit of reading for school, a welcome Shabbos nap, a quick change of clothes and I was off again, this time to meet some friends for an early dinner and perhaps a movie. Our tacos and fixin's at Cascabel Taqueria proved to be as yummy as my pho lunch, and The Blind Side was the perfect feel-good movie to round out out a really nice, feel-good kind of day.

So, although these weren’t my original plans, my Plan B Saturday was quite satisfying nonetheless—and maybe even better than what might have been.

Hmmm…who knows what next week will bring…
Posted by JanetheWriter at 7:09 PM