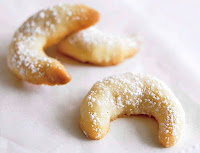 March 9th is my grandmother's birthday. Even though she’s been gone for almost 19 years, this day never passes unnoticed by me. Earlier today, without realizing the irony until later, I quoted her while IM’ing from home with a colleague.

Me: "OMG…some of the best writing gets done in sweats. As my grandmother always used to say, 'it’s a mechaiya'…not sure of the spelling on that, but you get the idea. :)"

Close enough, indeed, for the woman who, although she was born in 1896, had us all convinced that she was only as old as the century. In fact, she had four years on the century, but until Social Security told us otherwise, who knew?!

Close enough, indeed, for the brave young twenty-something who left home and country to make her way in the new world…learning English in night school and working as a milliner before marrying and raising two daughters during hard times.

Close enough, indeed, for the grandmother who, despite badly impaired vision, couldn’t cook enough for us…salmon croquettes, spaghetti and meatballs, rice fleish, stuffed cabbage, potato salad, latkes, almond crescent cookies, Jell-O with sliced bananas, and the ever popular New York toast, a favorite of my sister and me.

Close enough, indeed, for someone who saw Kaiser Wilhelm II ride into town on a white horse, remembered the sinking of the Titanic, watched Neil Armstrong walk on the moon and still described air conditioning on a hot day as a mechaiya.