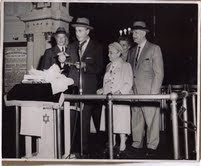 Earlier today, I received the following email from my Aunt Claire:

Brian and Carolyn are here for a few days. I was showing Carolyn some old family pictures and came across this one of Tante Mina, which I scanned and am sending to you as an attachment. In the picture, which is dated 1959, Tante Mina (at age 80) received some kind of honor at the Home of the Daughters of Jacob. She is standing with Abe Ribicoff (at the mike), who was the governor of Connecticut at that time, and later became Secretary of Health, Education and Welfare, in President Kennedy's Cabinet.

Since we just spoke about her a few days ago, I thought that you might like this picture.

I am not sure of my scanning ability, so let me know whether you receive the attachment intact.

In fact, the first version of the photo she sent did not come through, but as you can see, the second one most certainly did.

Not only am I pleased to see this photo of Tante Mina, but I am most impressed with the technology skills and persistence of my aunt!
Posted by JanetheWriter at 4:10 PM