Although I spent most of my growing up years in New Jersey, my family did live in Silver Spring, MD, just outside Washington, DC, from 1968 to 1972.  It was a crazy time in a crazy place, and even though I told my mother I wanted to be a hippie for Halloween one year, I really didn't know what hippies were, and I knew even less about the war they were protesting.

In my memory, though, this image was everywhere during that era: 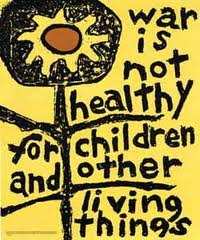 How sad that the world seems not to have learned much during the last four decades...or, in fact, during the many millennia that came before.

Inspired by Stacey Z. Robinson, this post is one in a series marking the Days of Awe, the 10 days of reflection, repentance and renewal between Rosh HaShana and Yom, Kippur.  Because Stacey graciously provided a list of writing prompts for this period, I'm going to play along...perhaps not as diligently as I did during Elul, but as time and inclination allow.
Posted by JanetheWriter at 11:08 PM