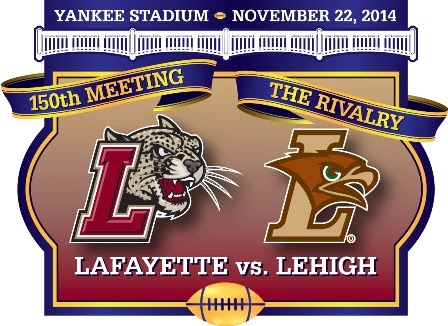 Although it's nearly a year away, my college roommate and I already are talking about getting tickets for the 2014 Lafayette-Lehigh game, which will be the 150th meeting of the two teams, and is the most played college rivalry in the country.  The game is slated for Yankee Stadium, which is, compared to either Lafayette or Lehigh, right in my backyard, and, best of all, easily accessible by public transportation.

Yesterday when I checked the Lafayette Leopards' official athletic site, however, I found this message:

The initial allotment of tickets for the 150th Lafayette-Lehigh football game, hosted by Lafayette at Yankee Stadium on Saturday, Nov. 22, 2014 at 3:30pm, have been exhausted.  Additional tickets have been requested from the Yankees.
Class of 2014 will be considered students for the 150th -You will be able to purchase when the student allotment goes on sale in April.

Aside from the fact that we can't yet get tickets (never mind that there's a grammatical error in the text of the message), I have another problem:  despite possessing a fine liberal arts education from one of the aforementioned schools, I don't understand the first thing about how football is played.

When I attended football games in high school--generally only on Thanksgiving, when Franklin played Piscataway, its arch rival, in a homecoming match-up--friends repeatedly would attempt to explain the basics to me, but as I told them each year after the game, "By the time I figured out which way Franklin was supposed to be running, they were supposed to be running the other way."  Despite my best efforts and exceedingly competent tutoring, I just never seemed to catch on.

Sadly, I'm not overly optimistic that the NFL's Beginner's Guide to Football, Football Rules and Basics for Dummies, or Football 101 - The Basics of Football will be of much help.

My best hope when it comes to learning about football between now and next November is that a few friends and acquaintances who are fans of this crazy, confusing game, and also happen to hold the title "rav," (which, in its purest sense, means "teacher"), might be willing to step up to the plate (I know, I know, that's baseball terminology) to teach me the basics of football as though it was the aleph bet.

What do you say, rabbinic football fans?  Are you up for the challenge?
Posted by JanetheWriter at 7:00 PM