Just as surely as my father and I chanted Kol Nidre, Ashamnu, and Al Cheit on Yom Kippur, so, too, did we spend time in Barnes and Noble on Saturday afternoon.  It is, as they say, "how we roll."

Our annual browsing in the Menlo Park bookstore began with Helen Rappaport's The Romanov Sisters.  Earlier in the week, my father had suggested he might want to read it, but after perusing it, he changed his mind, finding it to be too focused on the sisters' clothing, social events, and other "womanly" pursuits.  Once I chimed in with "Like a Russian version of Little Women?" we moved on to another table near the store's entrance.

There he found In the Kingdom of Ice, a book he has been eyeing for some time, but is awaiting the paperback edition.  Long a lover of books about exploration, many years ago, he turned me on to Endurance, the page-turner about Ernest Shakleton's Antarctic expedition, and more recently suggested two of Alan Moorehead's exploration volumes:  The White Nile and The Blue Nile.

Skipping the "Bargain Books," calendars, journals, and, of course, the cafe, we headed upstairs, where, much to my father's delight, we found this display table: 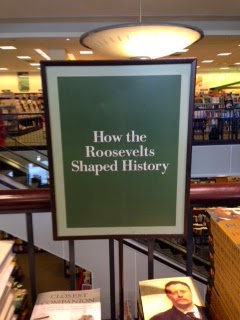 A Teddy Roosevelt groupie, my father currently is reading -- and thoroughly enjoying -- The Bully Pulpit, which was on prominent display there, and elsewhere throughout the store.  Among the other books on the table, several of which he's read were The Path Between the Seas, Franklin and Winston, Theodore Rex, and Traitor to His Class.

As for my reading pursuits, although I'm about halfway through The Emperor of All Maladies, lack of time and energy makes my progress slow, despite the fact that it's exceedingly well written and informative.  I do hope to finish it this fall, however, so that I can move on to another of the many books in my to-read pile.  With any luck, I'll work my way through at least of few of them in 5775!
Posted by JanetheWriter at 9:42 PM