An Auspicious Day For a Wedding 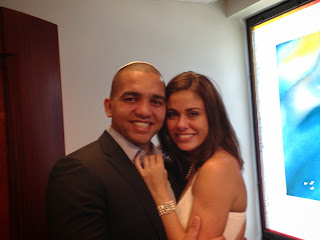 Today is Lag BaOmer, the 33rd day of the Counting of the Omer. According to ReformJudaism.org, "[T]he period of the Omer is a time of semi-mourning, when weddings and other festivities are avoided, in commemoration of a plague that killed thousands of students of Rabbi Akiva, a Talmudic scholar. Lag BaOmer is considered to be the day on which the plague ceased, and thus became a day on which the mourning rituals are abandoned and replaced with great joy." Observed primarily in Israel, Lag BaOmer is celebrated with picnics and bonfires, as well as weddings.


Imagine my delight, then, when a retired (but hardly retiring!) rabbi called me earlier this week to ask if a colleague and I would witness the wedding he was scheduled to perform in the URJ chapel this morning.

I jumped at the chance to participate, especially on such an auspicious day.

As Rabbi Thal told the couple -- Mimi, a recently minted physician, who grew up in the US before joining her father, stepmom, and sister in Jakarta, and Cleber, who hails from Brazil, and has been living in Jakarta for some time -- they "hit the jackpot" in selecting a wedding date.  Not only is seven (May 7) a number associated with creation, good fortune, and blessing, but also with the matriarchs and patriarchs, who number seven, as do the branches on the menorah in the ancient Temple.  Today's Hebrew date, 18 Iyar, too, holds special significance because chai, the Hebrew word for life is the numerical equivalent of 18.  Finally, Thursdays, because they are Torah reading days, also are auspicious days for a wedding.

Indeed, the bride was radiant, the ceremony lovely, and Victor and I were more than happy to witness the marriage of two young people so fully in love with each other.  As it surely did today, may God's countenance continue to shine brightly upon Mimi and Cleber, and may this auspicious wedding day mark the beginning of their long, wonderful married life together.
Mazel tov!
Posted by JanetheWriter at 10:00 PM