The Fine Line Between Memory and Lore 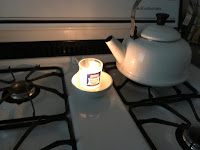 This yahrzeit candle is for Tante Laura, who died when I was only seven (yes, 47 years ago). Nonetheless, I have many sweet memories -- although some are more lore than memory.
Rest in peace, Tante Laura, now and always.
Posted by JanetheWriter at 10:49 PM