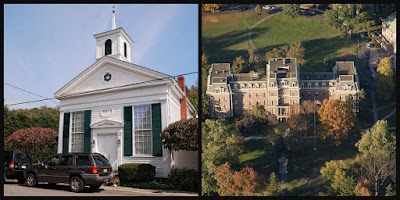 I’ve experienced my fair share of “small Jewish world” stories – especially given that I work for Judaism’s Reform Movement – but nothing quite like what happened this week. So, I want to thank for being the catalyst that made the planets align in my world.


"I am so grateful for all the Lafayette students I've worked with over the years. One of my favorites just stopped by my office and it was awesome to hear how well she is doing as a young professional in Chicago.

Shout-out to Laf alums who are my FB friends! Please comment with what year you graduated and what you are doing now."

I commented with this:


1985. Senior writer and editor at the Union for Reform Judaism, where I manage blog content and curate Ten Minutes of Torah, a featured blog post sent daily to a subscriber base of between 20,000 and 60,000 individuals.”

And then the conversation continued:

Me: “And probably your ‘alumna of longest standing’ FB friend!”

Liza: “Jane E. Herman to be fair, I didn't know Alex from the time I was a student. I know Alex through my daughter, Elizabeth Lucy class of ’15 and because my cousin, Susan Katz is her friend.

Alex: “I think I am fortunate to know all of you!”

Me: “Liza Roos Lucy I don't know her from my student days either. I met her about five years ago when I spoke on campus as part of the Madame de Lafayette speaker series.”

This might have been the end of the conversation and the story, but for some reason, I went to Liza’s FB page to see a bit more about her and this is where the story gets a little, um, bizarre… because she’s from Honesdale, PA.

See, I have a longtime friend who is the once-a-month rabbi at historic Congregation Beth Israel, the Reform congregation in Honesdale. During the last few months, I’ve told him a few different stories, to which he’s always responded, “All roads lead to Honesdale.”

In fact, it seems they do. A while back, at a bus stop in New York City, a woman asked me about the boots I was wearing. We struck up a conversation while we waited, and I learned she has a home in Honesdale. When Gene Kelly had surgery a few months back, I saw on FB that he would be recovering at his parents’ house…in Honesdale.

So, I sent this message and snippet of information from Liza’s FB page to my friend Elliott, who is not on FB:


Don't ask, but I'm in a FB conversation with a few people, and one of them has these "stats":

Elliott: “She’s a very good friend and president of the congregation.”

Me: “OMG....I'm going back on FB...this is the best small Jewish world story. OK if I share that we had this convo?”

That’s when I went back to your post and wrote this to Liza: “When I saw that you're from Honesdale, I reported in to my friend, Elliott, with whom I echat nearly daily, and, alas, another great small Jewish world story is born...Honesdale, Elliott, Laf Coll....wow!”

Here's the rest of the conversation that took place on FB Messenger.


Liza: “Whoa! You are Elliott's friend! I am president of Beth Israel in Honesdale where Smitty was rabbi for 44 years and now Elliott.”

Liza: “Did you speak a few years ago at a genetic counselor event?”

Me: “In Honesdale? No. At Laf Coll... yes, as a Madame de Lafayette speaker. I am a BRCA mutation carrier and very active in the hereditary cancer community, committed to raising awareness about these mutations, especially in the Ashkenazi Jewish community.”

Liza went on to tell me about her daughter, Alex, also a Laf Coll alumna and a genetic counselor specializing in breast cancer. She said that when Alex lived here in NYC, she and I spoke at a hereditary cancer event and according to Liza, “she will remember you.”

In the meantime, I was having a simultaneous conversation with Elliott…and anyone who knows me well knows that multi-tasking is not my forte.


Me: “Liza just asked me if I spoke at a genetic counselor event a few years back...the world is getting smaller by the minute!”

Elliott: “I had told her about you. Her daughter is a genetic counselor – specializing in breast cancer.”

A little while later, I connected on FB with Liza's daughter, Alex, who now lives in Philly, but we haven’t yet figured out at what event in NYC (or perhaps in Philly) we met.

Liza and I chatted a bit more before I had to get back to work, but I’m sure we’ll talk again – either on FB or perhaps even in person.

Sharing all this convoluted connectedness is not to demonstrate FB’s tremendous power of relationships, but really to thank you for expanding my Lafayette network, my genetic counselor/hereditary cancer network, and most of all, for giving me perhaps the best small Jewish world story ever!

Wishing you and your family a wonderful Easter,
~ Jane.

Inspired by Ima on (and off) the Bima, this post is one in a series marking the days of the Jewish month of Nisan leading up to Passover, which begins at sundown on Friday, March 30, corresponding to the Hebrew date 15 Nisan 5778. If you want to play along, check out this year's #BlogExodus and #ExodusGram prompts.
Posted by JanetheWriter at 11:49 PM