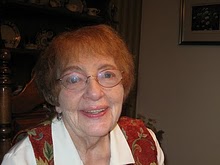 I didn’t get to finish this letter on Sunday because I spent the early part of the day cleaning my apartment. I know…I can hear your emphatic “Feh” loud and clear, but the windows were filthy and, as Amy would have said in her younger days, the garbage cans were “overfloating.”

In the midst of cleaning the windows, though, I received the sweetest text from Debbie Bravo, who, eight years ago at this season, was with us night and day. She wrote: “Good morning. Thinking of you on this day. I know it is always a hard day. I always think of your mom at this time of year because I know how much she loved that climb to Sinai.”

Here’s what I wrote back to her: “You are so sweet. Thank you. It was such a hard week for other reasons that the lead up to Mother’s Day sort of took a back seat. It did occur to me, though, that I can imagine my mom now taking up “Talmud Study for Beginners” in Olam haBa.

You probably already know that 10 days ago Aaron Panken was tragically killed when a small plane he was piloting crashed shortly after take-off. As I’m sure you can imagine, the entire Reform world is stunned. Even now, with the funeral and shiva over, it’s going to take a long time for the reality to sink in – most of all for his family, but for everyone else too. So, a new Talmud teacher is coming to Olam haBa – and maybe he’s already there, settling in, arranging some books in his office, putting together a syllabus. If he offers a class for lay people, I know you’ll be first in line to sign up.

In the late afternoon I went to Amy’s because she had to teach at a bankers’ meeting that night, so I stayed with Ian. At 15, he could have stayed by himself for the few hours she was gone, but it’s always more fun for both of us when I “babysit.” We brought in pizza for dinner and then I helped him with a history essay about British imperialism in India. (Sad to say, the kid got your feet, but definitely didn’t inherit any of your writing genes.) Certainly not a traditional Mother’s Day, but also not bad for a rainy Sunday.

In other news, tomorrow night I’m going to get all gussied up to go – for the first time – to Shaaray Tefila’s annual gala. The ticket cost me more than half a day’s worth of freelance work, but the honoree is someone who has been incredibly kind and caring since the day I met her, just five weeks after you died. You’d like Liz – she’s honest, forthright, studies Torah, has a lovely singing voice and a heart of gold, and is a lifelong member of the synagogue.

That’s about it from here for this week. I hope you had a good Mother’s Day and please don’t forget to sign up for a Talmud class. Maybe there will be one in time for Shavuot...that would be perfect for you!

P.S. It’s going to be near 90 degrees today and I’m schvitzing like it’s July. My turn to say “Feh,” a word that, thanks to you, increasingly is a part of my vocabulary!
Posted by JanetheWriter at 9:05 AM