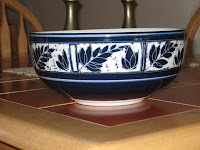 Earlier this week, I read Theodore Nierenberg’s obituary in the New York Times. He was the founder of Dansk International Designs, maker of cookware and pottery with a modern Scandinavian flair. The bowl over there on the left was made by Dansk. I received it as a wedding gift more than 20 years ago from Ruth and Steve, z.l., Bennett, friends of my parents. Today it remains among my favorites and even though I don’t do a lot of entertaining (and am no longer married), I sometimes use it just for fruit because it’s too pretty to keep tucked away in a cabinet.
Ironically enough, just today I invited a colleague for dinner in a few weeks when I will, I’m sure, use that Dansk bowl.

Here’s how it happened…

A few days ago, I learned that this colleague, who lost his job in the Union’s March madness that restructured the entire organization and reduced the staff by 25 percent has been appointed as the director of ARZA, the Association of Reform Zionists of America. Beginning in about 10 days, he’ll be spending Monday to Thursday in New York although his home and family are in the Washington, DC area.

And so I sent him the following note on Facebook:

This message entitles the bearer to a home cooked meal in New York City (a mere 10 blocks from 633) and is redeemable between August 17th and whenever “Biennial Jane” gets too busy with everyone else's chicken, fish and veggie to worry about yours! :)

Mazel tov on your new job!!

By coincidence, later in the day, I saw him briefly in the office (scroll down a bit and you can see him here, eating a falafel and chips). In a hasty hallway conversation, he told me he’d gotten my message and that he’d bring the produce (he’s an avid gardener) and cook for me.

“Oh, is that how it works?” I inquired, pleasantly surprised that even though I’d done the inviting, he’s going to do the cooking.

“Yes,” he replied, before rushing off to his next meeting.

So, in the next few weeks, keep an eye out here for that Dansk bowl and the fresh-from-the-garden fare that will fill it. What'll it be? Ratatouille over couscous? Cucumber and tomato salad? Sautéed green beans and garlic?

Stay tuned to find out…

Update: To see what deliciousness ended up on the Dansk bowl, click here.
Posted by JanetheWriter at 7:27 PM