Last week, when my sister and I met in the East Village to see Julie and Julia, she was toting her copy of Chocolate from the Cake Mix Doctor and had turned down the corner on page 405, where the recipe for Raspberry Swirl Brownies is printed. She—who prepared Julia’s boeuf bourguignon a while back when her book group met to ponder the book on which the movie is based—had carefully selected this particular recipe as one that I, her culinary-challenged sister, could, indeed, prepare and bring to a gathering of longtime friends (we’ve known each other since the mid-1970s) scheduled for tomorrow in the New Jersey suburbs.

In all fairness, it’s not that I’m exceptionally challenged when it comes to the ways of the kitchen, but rather that I don’t derive the same pleasure or relaxation as she does from the chopping, boiling, arranging, mixing and general potchkeying around in that room with the stove, sink and refrigerator. So, it’s no surprise that when my parents visit at her house for lunch or dinner on a Sunday, they’re frequently treated to homemade hummus as an appetizer, tasty pasta combinations using such ingredients as kale, pine nuts and yellow tomatoes, and delectable desserts. An Italian plum tart with a lattice crust and a blueberry cobbler are two recent examples. (In fact, while my friends and I are enjoying Raspberry Swirl Brownies tomorrow, my sister, my parents and a few of her friends will be delighting in this Fresh Fig and Almond Crostata.) In my house, on the other hand, salsa and chips, tuna sandwiches with sliced avocado and fresh fruit are more the norm.

For me, therefore, this brownie bake-off was a chore. But, having purchased all the necessary ingredients for both the Raspberry Swirl Brownies and a batch of regular brownies (likely to be more appealing to the kids), I set out to prepare the first of the two recipes:

I was totally okay with Step #1 and made it halfway through Step #2 with no problem. I don’t own a rubber spatula, however, and had to use a wooden spoon instead. Recognizing that this is not a huge culinary gaffe, I pushed on. I left off the pecans, but finally, gingerly, I placed the pan in the oven and set the timer for 24 minutes.

With recipe #1 out of the way, I got cracking on recipe #2, using the same mixing bowl I’d used for the first batch, and following the recipe on the back of the box:

Again, I was good with Step #1, but ran into trouble with Step #2. The only oil I have is olive oil and something told me that just wouldn’t work. Unable to reach my sister to confirm my suspicion, I melted a stick of butter, which, when fully liquid was exactly a ½ cup (whew!) and poured it in. Fat’s fat, I reasoned…what could be bad?

When it was thoroughly mixed, I poured the batter into my 8”x8” pan and put the pan into the oven with the bigger one, which, according to the timer, still had 10 minutes to go.

When the timer sounded, the Recipe #1 brownies appeared to need a few more minutes so I put them back in and added four minutes to the timer. When it rang again, I took them out. They looked great, but lacking a wire rack (another culinary gaffe?), I had to let them cool directly on the counter.

With nearly 40 minutes still to go in the oven for Recipe #2, I set the timer, cranked the AC and stretched out on the couch. I needed a rest! ;-)

The ding of the timer, signaling that Recipe #2 was done, woke me from my cat nap. I took them out of the oven and, like those in Recipe #1, they looked great—and smelled quite yummy, too! 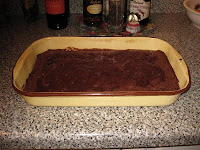 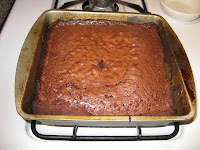 Of course, the proof is in the tasting and that won’t happen until sometime tomorrow afternoon. So, stay tuned for a full taste report soon.
Posted by JanetheWriter at 7:39 PM