Because You Are the Kind of Person That Wants to Know 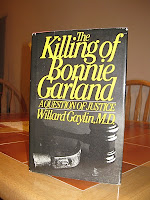 Waiting in my mailbox when I arrived home tonight was a small white envelope addressed in my father’s distinctive hand. Folded to fit inside was the obituary of Jack T. Litman that he’d clipped from last Saturday’s New York Times. According to the piece, which both my father and I had read and discussed a few days after it appeared, Mr. Litman was "a lawyer known for his cerebral, cool and aggressive defense of notorious murder defendants and his uncanny ability to persuade juries to sympathize with crimes of passion....[His] most famous murder cases involved young men from humble origins who were charged with killing young women from more privileged backgrounds."

Before sending it to me, my father had attached a Post-it note on which he’d scribbled “Because you are the kind of person that wants to know” and also underlined the last sentence in the third paragraph—“Richard Herrin, who went to Yale on scholarship after growing up in a Los Angeles barrio, was accused of beating to death Bonnie Joan Garland, a fellow Yale student in 1977 after she broke up with him.” Robert Chambers, the "Preppy Killer" was perhaps Mr. Litman's most famous defendant and, according to the article, "After highly publicized trials and lurid headlines, Mr. Litman pulled off the unlikely feat of winning sympathy from the juries for both defendants."

To anyone but my sister or me, the content of that envelope would have been baffling, to say the least. To us, however, it made perfect sense.

My father is a lover of many things. Among them are true crime and, as he likes to say, “directing my reading activities.” These two things came together perfectly when, sometime during my college years, he purchased a secondhand copy of The Killing of Bonnie Garland: A Question of Justice by Willard Gaylin, M.D. and, after reading it himself, urged both my sister and me to read it as well. Having followed the 1978 trial of Richard Herrin as reported in the New York Times, my father was familiar with the case and likely snagged the book at one or another garage sale or flea market where he and my mother could often be found poking around in those days. Indeed, it is a riveting tale of two star-crossed Yale students from vastly different worlds and a critical examination of the factors that came into play when, distraught by her rejection after a passionate three-year relationship, he bludgeoned her to death in her parents’ Westchester home.

Tonight I reread the obituary and now have carefully refolded the clipping, replaced it in the envelope, and tucked it inside the dust jacket of the very same flea market copy of the book that still sits on the bookshelf in my living room. I'm grateful anew to my father for making me "the kind of person that wants to know," for “directing my reading activities,” and for steering me toward this and so many other little known treasures just waiting to be discovered.
Posted by JanetheWriter at 7:48 PM