To Lafayette, For Auld Lang Syne 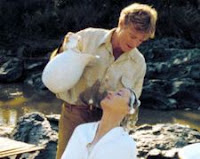 At some point this weekend, I’m going with a friend to see It’s Complicated with Meryl Streep, Alec Baldwin and Steve Martin. I’ve been a Meryl Streep fan since she co-starred with Dustin Hoffman in Kramer vs. Kramer back in 1979.

Six years later, in the spring of 1985, 497 classmates and I followed her, her auburn curls cascading from under a black mortarboard, from Lafayette College’s Kirby Field House, up the hill, across a corner of the quad to the steps of Skillman Library, where our families and friends waited to celebrate our graduation with us.

We’d all traveled far—including Ms. Streep—to be there that day. A few days earlier, she’d flown from Kenya, where the filming of Out of Africa was in full swing, and to where she would return shortly after our commencement, the College’s 150th. She kicked off her remarks with a beautiful a cappella rendition of Que Sera Sera and before long the Class of 1985 was, indeed, off to see whatever would be. (In between she told us about the scene in the movie in which Robert Redford washes her hair and that although it had to be shot and re-shot many times, she didn't mind.)

This spring, many of us will return to Easton to celebrate the 25th anniversary of that day, our Lafayette experience, and what indeed has been. Twenty-five years is a long time. In fact, it’s a generation, although I’d never really thought about it that way before.

That is, until yesterday. That’s when I was schmoozing with two colleagues, who, like me, are graduates of other of Pennsylvania’s small, private liberal arts colleges. Madeline is a recent alumna of Muhlenberg College in Allentown and Ben is an even more recent graduate of Franklin and Marshall College in Lancaster. Although my days on campus were much longer ago than either of theirs, we still shared common experiences and “take aways” about which we reminisced—small classes, professors who knew us personally, a high quality education (that gains value with each passing year), tour guiding (I know, it really isn’t a verb), dorm life and drinking. (Yes, before I ever set foot in a classroom on campus, I was introduced to “bug juice,” a sugary concoction of grain alcohol and Kool-Aid that most often was “eloquently” ladled from an industrial-sized garbage can lined with a plastic bag into plastic drinking cups in fraternities' basement bar rooms. Indeed, much of my Lafayette education occurred in settings other than classrooms.)

When Ben told us about how he often walked prospective students and their parents from the administration building where he had a work-study job to the one where the admissions office was housed, I was reminded of my own tour of the F&M campus during the summer of 1980. In January of 1981, my father and I returned to Lancaster, this time for my interview in the admissions office. It was inauguration day and throughout our westward trek, the car radio brought us the proceedings underway in Washington—and the associated release of 53 American hostages who had been held captive for 444 days in the American Embassy in Tehran, marking the end of the Iran hostage crisis.

As I concluded my reminiscence of that historic day, it occurred to me that these two colleagues were probably too young to remember it.

Me: You probably don’t even remember that, do you? Do you even know about the Iranian hostage crisis?

Ben: Yes, I know about it, but there was no Ben Fink.

Ben: There was no Miriam Fink.

Ben: There wasn’t even a Nathaniel Fink.

According to Wikipedia, the site to which every good academic turns for basic information about just about anything, “…auld lang syne literally means ‘old long since,’ but a more idiomatic English translation would be something like ‘long long ago,’ ‘days of long ago,’ or ‘olden days.’ ‘For old times' sake,’ or ‘to the (good) old days,’ or ‘To days (or times) gone by’ may be modern-day expressions, in common use as toasts, that capture the spirit of ‘for auld lang syne.’”

To F&M, for auld lang syne.

To Muhlenberg, for auld lang syne.

To Lafayette, for auld lang syne.
Posted by JanetheWriter at 3:23 PM