#BlogExodus: Time to Spring into Action on the Passover Cooking

Inspired by Ima on (and off) the Bima's #BlogExodus initiative, this is one in an occasional series of posts loosely tied to Passover. 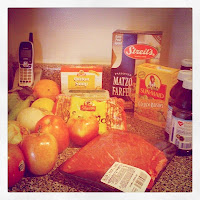 Growing up, Passover was always a big deal in our house…my mother’s favorite holiday.  Two years ago on 14 Nisan, with the table set and all the cooking done, she went into the hospital.  She entered hospice on 6 Sivan (Shavuot) and died on 17 Sivan.  Needless to say, Passover has never been the same.

This year, my sister and I (with help from our Aunt Claire, our mother’s older sister) are making a seder for the first time.  The division of labor looks something like this:

Aunt Claire:  Soup, matzah balls, gefilte fish, horseradish (and the shankbone and egg for the seder plate)
(I will #ShowUsYourMatzahBalls via Instagram directly from the seder!)

JanetheWriter:  Brisket, charoset, matzah farfel stuffing (and the seder plate itself—a wedding gift, that until now has remained unused in the box—as well as the orange that will sit atop it, squished between two of the other items)

Although I’m no Tina Wasserman, I hope that I watched my mother enough to do all the cooking “right.”

Tuesday night:  Crock pot brisket, the recipe for which you can find in this post

Wednesday night:  Matzah farfel stuffing, which goes something like this:

If I’m going to do all the cooking I’ve just detailed, I’d better go do the reading for Thursday night’s class right now.

See you in the kitchen…
Posted by JanetheWriter at 3:00 PM