I am Forbidden: A Brief Book Review

Remember when I posted this photo on Facebook back in March? 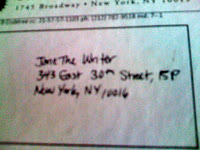 The caption said:  Look at how the package I received in today's mail was addressed! Stay tuned for details about what was inside...

Here are the details:  The package contained a pre-publication copy of I am Forbidden by Anouk Markovits, which will be published as the author's English language debut on May 8 by Hogarth Books, a division of the Crown Publishing Group.

That was the easy part.

The harder part is sorting out my thoughts and feelings about the book, which once I started, I couldn't put down.  Set in the Satmar Hasidic community, a place that seems narrower than the narrowest place in Mitzrayim, the story quickly swallowed me up.  Josef, Zalman, Hannah, Mila, Atara and Judith.  Transylvania, Paris, and New York.  World War II, 1968, 2005, today.  The characters, strictly confined by the 613 commandments, but always spinning, like Simchat Torah dancers, would, at first blush, appear to be spinning in place...year after year, baby after baby.  Some unexpected choices, however, take them to some unimagined places--within and beyond their community.

Look for I am Forbidden in bookstores soon.

Posted by JanetheWriter at 12:34 AM