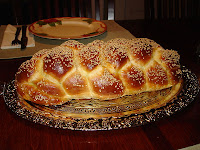 Who would have guessed that one comment about challah on Facebook could spark so much conversation?  But that’s exactly what happened when I posted this status update yesterday:

Challah on my mind...can't wait for tomorrow night!

Not only did the comment get 13 “Likes,” but the following conversation ensued:

Scott:  Yet another reason that I'm happy to be a Reform Jew :)

Larry:  In my home growing up, we couldn't have had challah at mot'z'ei Pesach, because it would have been treif, baked on yom tov!

Simon:  ... or at least "some Reform Jews and most (?) Israelis..." (?) I believe that American (and other) "Orthodox" and "other halachically observant" Jews who are in Israel for the chag are "supposed" to adhere to the eight days of their home. I'm not certain about those who have made aliyah. And there are some Reform Jews here in the USA who still stick to the eight days as well. Whoever said that anything is simple? :o))

JanetheWriter:  Very true. Here is my clarification: I am among the Reform Jews in this country who celebrate seven days of Pesach.

Joanne:  I have to wait until Saturday night. Or, as a Reform Jew I don't, but I've always adhered to the eight-day holiday and I can't break it now. And Larry is right...everyone I know who observes Pesach kasher laws won't buy the challah until Sunday or Monday (and will check to make sure it wasn't baked on Friday--and certainly not Saturday).

So whether you're already enjoying some post-Pesach challah or are holding out until tomorrow night, I wish you “b'tayavon!”
Posted by JanetheWriter at 9:14 PM