I'd Know Your Dairy Dishes Anywhere 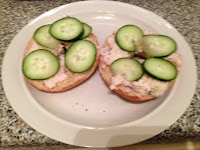 That bagel and white fish salad over there was my dinner tonight and represents the one I would have eaten at your house yesterday had we not had to head directly back to New Jersey from Baltimore.  Of course, it’s not as though I never ate a bagel in your house…and in fact, I’d know your dairy dishes anywhere.  Who could forget that big, abstract orange flower in the middle of the plate?

There are so many other things we can’t forget…and reminisced about all of them on our ride down to Chevy Chase on Tuesday and on the way home yesterday, too.

Amy kept reminding us about the parrot (I think it was a parakeet, though), whose cage was on a television cart that she loved to push around your apartment in Georgian Woods. She couldn’t have been much more than three or four at the time.  That was during the same era that she asked you, in the middle of Snider’s Market, if watermelon had nitrates, and when Lipton made flavored instant iced tea that you and my mom loved—orange for you, lime for her. 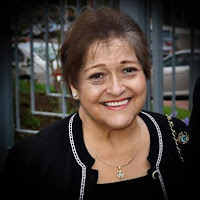 Later, when you moved to Winding Waye Lane, there was Ari, the three-legged dog, Barbara’s rainbow-themed room with the bright orange walls, Dr. Steinberg and my dad dozing in the family room, and, of course, bagels and noodle kugel served on your dairy dishes whenever we’d visit from New Jersey for the weekend.  There also were the weekly Monday night phone calls with my mom that began at 11 p.m.—when the long-distance rates went down—and continued at that hour even after unlimited long-distance became the norm.

Of course there was your gas-guzzling Chevy Impala, too.  It was the car you drove to pick up a friend and me from the Shoreham Americana Hotel where we were attending a model United Nations (our high school was the German Democratic Republic) so we could meet Heidi, who’d been born just a few weeks earlier.  I’ll never forget the first time I saw her sleeping in the playpen in your family room that afternoon and what a treat it was to hold her and feed her a bottle before you had to take us back to the hotel.

More recently and with button-bursting pride, I know you told many of your Hadassah friends about my job as Eric Yoffie’s writer, and not once during the last 18 months did you and I have a conversation in which you didn’t tell me how glad you were that I’d opted for a prophylactic mastectomy and autologous reconstruction, avoiding the risks and hassles that can come along with implants.

Yesterday before we headed to the cemetery, Heidi told us that she envisions you and my mom together in the world to come, having picked up your conversation right where you left off in this world, just about three years ago this month.  If she’s right—and I hope she is—you’ve got a bit of catching up to do, which no doubt you’ll do in some late night chats in the coming weeks.  Once you’re caught up, I’d like to think you’ll head out to do some shopping, and can easily see the two of you together in Pier One choosing new place mats and matching napkins, drinking glasses, or even a new coffee table—provided it’s all on sale, of course!

Whatever you and my mom are up to, though, I wish both of you eternal peace in the shadow of God’s wings. I miss you both and am glad you have each other.