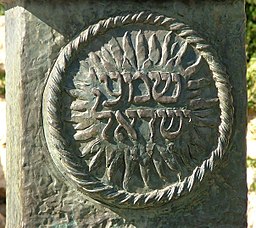 Last week at a worship committee meeting at my synagogue, a committee member offered a d’var Torah about The Ani Tefilla Weekday Siddur, an Orthodox prayer book designed for high school students. It offers four different commentaries, interpretations, or explanations on each of the prayers recited during daily worship:
The Ani tefilla for the Shema (the central prayer of Judaism that begins, “Hear, O Israel,…”) offers students this story:


Rabbi Eliezer Silver, a leader of American Orthodox Jewry in the twentieth century was president of the Va’ad Hatzala or the Rescue Committee for Jews who survived the Shoah. In that capacity, he travelled in post-war Europe looking for Jewish children who had ended up in non-Jewish orphanages, most often sponsored by the Church. In one such case he came to an orphanage in Alsace Lorraine asking if there were Jewish children there. He was told that there were none or that they could not be identified as such; their origins were unknown and they themselves had forgotten where they were from. Rabbi Silver insisted that he nevertheless be permitted to see the children and he was finally allowed to do so for a few moments before their bedtime. He walked into a room filled with beds of children preparing to go to sleep. He called out “ Shema Yisrael Hashem Elokeinu Hashem Ehad” and immediately a young child cried out “Mommy!” Soon other voices joined in as children began to come forward crying out for their mothers. “These children are mine,” he said to the priest. “I will take them now.”

Every time I think of this story, I get chills. What poignant reminders it offers us for the new year: to hear small voices, whether they belong to us or to others; to persist in pursuing what we know is right and just; and to work to find individual meaning in our prayers.

Inspired by Ima on (and off) the Bima , this #BlogElul post is one in a series marking the days of the Hebrew month of Elul, which precede the Jewish High Holidays and traditionally serve as a time of reflection and spiritual preparation for the new year.
Posted by JanetheWriter at 9:32 PM