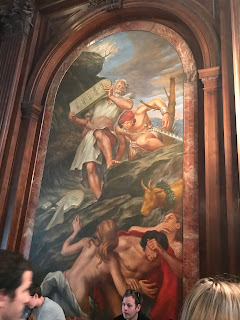 Following up on yesterday's #BlogElul post, “understanding” is another area in which I regularly seem to come up short – especially when it comes to some common societal behaviors and patterns. Watching the passing scene in a Starbucks earlier today, I easily and almost immediately identified three things I don’t understand:

Tattoos: Even as I prepare to have my own tattoos redone next month (hoping three’s the charm), I don’t understand the popularity of sleeve and sock tattoos – or, on a similar note, the attraction of hair dyed to match cotton candy.

Cell phone dependence: I am always baffled by couples who sit together in restaurants, intently bent over their phones. Are they texting each other? Texting other people? Scrolling through Instagram, Facebook, Snapchat? How badly do they want to be with the person sitting across the table?

Cell phone photos: This afternoon, I took a tour of the New York Public Library. It was fascinating, and most of the group listened intently to the docent throughout the hour-long tour. There were a few people, though, who seemed so busy photographing and videotaping the surroundings (it is a beautiful, historic structure) that they could not possibly have heard the docent’s remarks. I can’t help but wonder what they’ll remember about the New York Public Library once they’re back home – and what images and ideas from the tour will remain with them, not their phones.

(I did take one photo during the tour – in the McGraw Rotunda – and it is above. The first in a series of four murals by Edward Laning that depict the history of the written word, Moses with the Tablets of Law, shows Moses returning from atop Mt. Sinai to find the Israelites worshipping the Golden Calf. The other paintings in the series show a medieval monk copying a manuscript; Johann Gutenberg displaying a copy of his Bible; and Ottmar Mergenthaler using the linotype machine he invented.)

Even as my father tells me repeatedly: “You can’t know too much," I do know I have little need to understand any of these things (or the many others that often perplex me). In the new year (and always), may I continue to learn and grow, concentrating on topics and ideas that truly interest and intrigue me instead of those that only highlight my lack of understanding of others’ choices.

Inspired by Ima on (and off) the Bima , this #BlogElul post is one in a series marking the days of the Hebrew month of Elul, which precede the Jewish High Holidays and traditionally serve as a time of reflection and spiritual preparation for the new year.
Posted by JanetheWriter at 11:06 PM