Last month I spent six wonderful days at Kenyon College in Gambier, OH, where I participated in the Kenyon Institute's Beyond Walls writing seminar, the inaugural session of an interfaith initiative for clergy, seminarians, and people who write in religious organizations.

Thanks to terrific faculty, a supportive community of similarly minded writers, Wiggin Street Coffee, and -- perhaps most important -- daily solo writing time, I have this op-ed to show for my efforts. 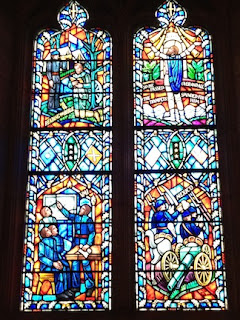 Charleston’s historic “Mother Emanuel” A.M.E. Church was their sanctuary. Midweek they studied bible under its roof; on Sundays they prayed from its pews. Their spiritual lives were centered there. Their racially motivated murders sparked the current debate over the Confederate flag – the same flag their     murderer, Dylann Roof, holds in a photo on his website.

At Washington National Cathedral, the Confederate flag is embedded in the stained glass windows that honor Confederate Army Generals Thomas “Stonewall” Jackson and Robert E. Lee. The United Daughters of the Confederacy donated the windows to the Cathedral in 1953.

How can the Cathedral, which bills itself as “a great and beautiful edifice…[and] a spiritual resource for our nation,” display this 21st century symbol of racism, hatred, and slavery? How can the Cathedral do so without mocking its claim as a “grand spiritual center where Americans unite to…confront the pressing moral and social issues of the day”?

Indeed, such billing dishonors the Cathedral, its mission, and, according to a YouGov.com poll, the nearly 60% of this country’s citizens – up from 46% just three months ago – who disapprove of its public display. During the same period, those who approve of flying the flag in public dropped from 36% to 24%.

According to Jewish tradition, “Kol Yisrael arevim zeh la-zeh” – all Jews are responsible for one another. Americans, too, need to be responsible for one another – especially around the moral and social issues that affect us all. If the Confederate flag has the power to incite deadly racial     violence in a Charleston church, how can we, in good conscience, allow it to remain in one that purports to be “a place open to all” in our nation’s capital?

As historian Scott Hancock rightly notes in his 2013 essay on the Huffington Post’s blog, “[w]e should not honor or respect the symbols of any government or soldier who not only fought for ideals directly opposed to the central founding ideals of our country, but were willing to kill those who stood in their way. We don't fly the flag of traitors.”

Instead, all Americans – if we truly are to have each other’s backs – must urge the members of the Cathedral’s fine arts committee to recommend to the Cathedral’s chapter (board of directors) that it vote to remove the Jackson Lee windows from the church as quickly as possible.

Although this gesture cannot begin to restore the “Mother Emanuel” community to wholeness, it will move the National Cathedral closer to fulfilling its mission as “a catalyst for spiritual harmony in our nation, renewal in the churches, reconciliation among faiths, and compassion in our world.”

Most of all, removing the Confederate flag from the Cathedral will serve to remind America and her citizens to honor the memories of all those needlessly lost to intolerance, narrow-mindedness, and bigotry. Among them are the nine Emanuel A.M.E. Church members whose shloshim (30-day mourning period that follows burial) recently ended:

May their memories be for a blessing.
Posted by JanetheWriter at 9:53 PM